Discover the latest releases, the hottest topics and the stand-out products of the 47th annual society for neuroscience meeting 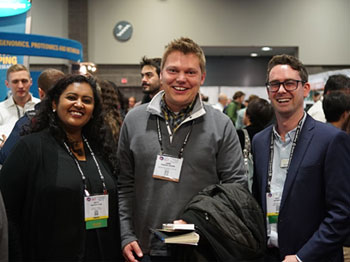 From the “superhero of artificial intelligence”, Demis Hassabis, discussing imagination, memory and the connection between neuroscience and artificial intelligence, to the growing issue of big data, to tackling opioid addiction head-on, this year’s Neuroscience did not disappoint in Washington DC, USA. With lectures covering themes ranging from cognition to neural excitability, synapses and glia, this five-day event featured 902 sessions and explored the frontiers of neuroscience knowledge with over 30,000 attendees.

Big data was a key theme of the event. Imaging a whole mouse brain, consisting of around 70 million neurons, requires upwards of 30 terabytes of data. So, to image the human brain — with around 86 billion neurons, over a 100,000 miles of nerve fibers in the cortex, and up to 125 trillion synapses —  would (first) require 1,000 Zeiss MultiSEM systems running for ten years, as well as a vast amount of data storage, says Dr Stephan Nickell, product manager at Carl Zeiss Microscopy.

Analyzing this amount of data will become ever more pressing with the rise of virtual reality (VR) technologies, and using three-dimensional platforms to manipulate and segment datasets. Prof. Anastas Popratiloff told SelectScience more about the very large datasets produced by confocal imagery and electron microscopy, and how VR technology is making this data more accessible. “One of the biggest challenges of imaging is data visualization and how we represent our three-dimensional data on a two-dimensional platform. With a virtual reality approach – it helps to explore the features and paradigms in the brain in a native state.”

Addressing the current epidemic where ~2.5 million Americans meet the criteria for opioid abuse, the Society for Neuroscience exhibited concerted efforts to bring several research findings together. Dr. Francesco Leri, a drug addiction researcher from the University of Guelph shared his insights with SelectScience. His lab’s findings, using rats, suggest that nutrition and food habits, namely, a diet heavy in high fructose corn syrup, can influence and increase vulnerability to oxycodone addictions. With implications on dietary decisions and future policy enforcements on sugar products, this research and many others hope to tackle the opioid epidemic head-on. This exclusive interview will soon become available on SelectScience.

How the Brain Understands Language

In a world where emojis speak a thousand words, we are growing aware of how language is evolving. Yet, a lot remains unknown about how language networks are developed and learned in the brain. SelectScience caught up with this year’s Presidential Special Lecture speaker, Dr. Erich Jarvis, who studies the neurobiology of vocal communication. With a big overarching goal of understanding how the brain perceives, learns and responds to spoken language, Dr. Jarvis shared his findings, insights and his journey with SelectScience. Watch this space for the video coming soon.

Man versus Machine: Automation is slowly but surely revolutionizing neuroscience

Among the technologies at SfN17, one theme emerged: getting automation into every lab. With cell imagers from Thermo Fisher Scientific being able to automatically perform Sholl analysis on your neurons (yes, even over the weekend) to BioTek’s microplate reader being able to process 8 plates at a time, it is clear that automation is a trend that is here to stay. With the power to speed up experiments and make data more reproducible, automation is a welcome change to the field.

Over 500 exhibitors from industrial, academic and government research labs presented an incredible showcase for scientific advancement. Among the stand-out innovations making an impact in the exhibition hall were:

Other notable exhibitors included those helping to model brain injury and child development, and there were a number of interesting sessions on concussion which also explored this theme. Of interest to many attending the conference was Prof. Brian Johnson, Lieutenant Commander, and Assistant Professor at U.S. Air Force Academy. Prof. Johnson has been applying in-helmet accelerometer technologies to his work on head injuries and the influence of rotational and linear impact on the outcomes and treatment direction of athletic injury, as well as the role of circulating biomarker discovery to concussion diagnosis.

The Society for Neuroscience (SfN) President, Dr. Eric Nestler, also gave us a positive message on how he sees communication helping to advance science. Join SelectScience today and help accelerate your way to scientific success. 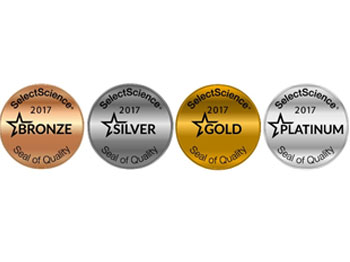 Seal of Quality recipients are selected quarterly and dated by the year in which they are attained. Manufacturers will qualify based on their overall product review rating on SelectScience

A highlight for many of the exhibitors present at Neuroscience 2017 included the SelectScience® Seals of Quality celebration, where this year’s recipients of the prestigious Seals of Quality were announced, recognizing the products that have consistently received the highest review ratings. This unique program was launched in June to further assist scientists in making important purchasing decisions for their labs.

Among those recognized were:

For more news and video interviews from the show floor, visit our Neuroscience 2017 Special Feature.