Learn about the essential and upcoming technologies for target biology in this interview with Andrea Faedo, Head of Innovative Tools&Solutions at Axxam S.p.A. 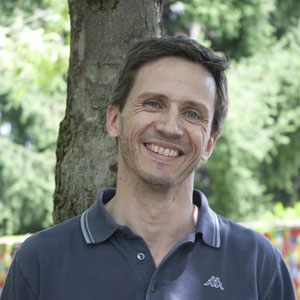 A good cellular model in combination with high-throughput screening (HTS) accelerates the search for drug targets in numerous conditions such as cancer, diabetes or neurodegenerative disorders. In this interview we speak with Andrea Faedo, Head of Innovative Tools&Solutions at Axxam S.p.A., a company specializing in drug discovery services. Faedo shares his insights into the importance of designing a good cellular model that reveals the internal biology, such as cellular autophagy, and expediting the early drug discovery phase with HTS workflows. He also looks ahead to the presentation he will be delivering at SLAS Europe later this week.

SS: Please introduce yourself and role at Axxam

AF: I am head of a unit called “Innovative Tools&Solutions” (iTS) at Axxam, which consists of three parts.

The first is the Cell Factory Unit, where all the cell lines that are going to HTS are processed. This lab is responsible for the cultivation, expansion, and seeding of cell lines that have been previously developed at Axxam or acquired from providers. The Cell Factory also takes care of the cell lines’ repository at Axxam, by constantly updating an internal database and producing master banks and working banks.

The second part is the iPSC lab that is involved in the adaptation of iPSC-derived cell lines, including neurons and cardiomyocytes, to miniaturization formats (384MTPs) for their use in compound screening. Furthermore, we generate stable iPSC reporter lines by incorporating genetically encoded indicators or fluorescent proteins into the AVSS1 locus (a “safe harbour” region) or into specific loci for targets of interest.

The third part is the Molecular Biology Unit that is responsible for the design and generation of all the constructs that are going to be used during the assay development phase to generate recombinant cell lines and to produce proteins with different purification tags. The lab also takes care of the qPCR experiments that are necessary during assay development and also in some HTS campaigns.

SS: Tell us a little more about Axxam

AF: Axxam S.p.A. is an innovative partner research organization (iPRO) and discovery company located at Openzone Science Park, Bresso, in Milan, Italy, with chemistry laboratories located in Naples and business development offices in Europe, US and Japan. The main sector in which we operate is early drug discovery.

Axxam S.p.A was founded in November 2001 as a spin-off from the Bayer Group. Since its inception, Axxam has supported the discovery programs of its clients by providing excellent quality discovery services carried out by highly engaged experts. Our passion for conducting clients’ discovery programs is complemented by the pharmaceutical industry experience from both the management, as well as the scientist teams.

SS: What are the main challenges in target biology and how are you addressing them?

AF: In target biology, we should be aware that a good cellular model is very important in order to proceed with a smooth HTS phase.

In this regard, at Axxam we put a lot of attention during the assay development phase when the recombinant cell line is generated. In particular, we perform two rounds of limiting dilutions in order to have a pure clone that performs at the best in HTS instrumentation such as FLIPRTETRA, Pherastar or others. The clone is also verified by qPCR to quantify the amount of expressed recombinant target. Particular attention is also put into developing the right controls, such as mock lines, in order to exclude unspecific effects. We also analyze the final clone by electrophysiological activity, when possible. In this way the data generated by fluorescent/luminescence readouts is then integrated with manual patch clamp or Q-Patch analysis.

A good cellular model starts with a good molecular biology tool. At Axxam, we have a longstanding tradition of molecular biology activity, with hundreds of plasmid constructs stored in our repository. Every target is carefully analyzed in order to identify the right sequence and possible isoforms that can be of interest, depending on the final goal. Sequence optimization is then critical to achieve a good expression level in mammalian cell lines. Finally, QC for all the constructs that are going to be used in assay development is carried out, including sequencing, restriction analysis, purity…

A major goal for the future of target biology will be to use new cellular models that are closer to the in vivo physiology. Human pluripotent stem cells (hPSC), either induced or embryonic (iPS or hES cells), are entering the field of screening technologies. This will greatly improve the power of innovative screening and the possibility to get hits that will move smoothly through confirmation and development.  Interestingly, 3D protocols starting from patient-derived iPS cells also brought many advantages in drug testing (see the cystic fibrosis field).

SS: What are the most innovative technologies in your field at this time?

AF: Improved automation from cell culturing to HTS will greatly improve the quality of screenings. Standardized procedures will allow experiments to be replicated across labs and models. If I think about the iPS field, this is still to be achieved in terms of adapting these cells and their derivatives to automation (substrates, seeding, media replacement, ….). Optogenetics is a rapidly growing field in basic research and it is a much-requested technology.

SS: Tell us about the session you will be presenting at SLAS Europe 2018

AF: The focus of my talk during the SLAS meeting will be a target that is expressed in lysosomes, TRPML1, a transient receptor potential family member, which takes a major role in autophagy. We are strongly interested in this target and in the possibility of modulating its action. Finding hits that will positively or negatively modulate its activity will improve the chance of treating certain types of neurodegenerative disorders, cancers, and diabetic nephropathy — fields in which autophagy plays an important role. TRPML1 is a Ca2+ channel expressed on the lysosomal membrane and allows Ca2+ flux from the inside of the lysosome to the cytosol. This calcium flux then triggers a number of events, including lysosome exocytosis. We developed a HEK293 cell line stably expressing hTRPML1 and a Ca2+ reporter, which allows us to monitor the changes of Ca2+ concentration after TRPML1 activation. By using this cellular tool, we were able to develop an assay fully adapted to an HTS campaign.

SS: What do you see for the future of drug discovery screening?

AF: In the past few years, there has been a strong interest in developing cellular models that are more similar to the in vivo physiology of the tissue of interest, such as hiPSC-derived cells. More recently, hiPSC and adult stem cells from patients have been used to develop “organoids”, that are 3D aggregates of differentiated cells resembling, in terms of organization, gene expression, and also the functionality of the real organ (in particular kidney and lung organoids). The major challenge will be to bring these new cellular models to complete automation and miniaturization. Big steps forward have already been made, in particular for high-content analysis. A major improvement would be to have the possibility to test hundreds of thousands of compounds in HTS campaigns using instruments like the FLIPRTETRA or similar.

Catch Andrea Faedo’s presentation at SLAS Europe 2018 in the Exploring Target Biology session at 10.30 am on Thursday, June 28

Visit SelectScience booth #414 at SLAS Europe, June 27-29, to meet the team and pick up a free gift.