Learn about the importance of early changes in cell metabolism 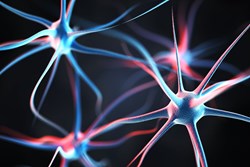 Alzheimer’s disease is an age-related neurodegenerative disorder characterized by the formation of amyloid-β (Aβ) plaques and dystrophic neurites in the brain. Aβ is generated via enzymatic cleavage, so inhibitors of these enzymes are potential targets for reducing Aβ accumulation. Dystrophic neurites (DNs) are aggregates associated with amyloid plaques, consisting of several proteins including reticulon 3, hyperphosphorylated tau, ubiquitin and APLP-2. Dr Sharoar studies these cellular processes in model systems and investigates modulators that may have therapeutic potential for AD.

Dystrophic neurites and neurogenerative disease
In a recent publication, Dr Sharoar and colleagues revealed that mitochondrial dysfunction is related to the formation of dystrophic neurites, in an AD mouse model. They showed that tubular endoplasmic reticulum abnormally accumulates in the region of Aβ plaques, which promotes formation of DNs and degeneration of mitochondria, the cellular component vital for metabolism. The team also demonstrated that inhibition of a key neuronal protein, that accumulates in DNs, reduced mitochondrial dysfunction in aging and AD models.

Efficient protein detection
A key part of this work involved the detection and quantification of tubular endoplasmic reticulum associated proteins using immunoprecipitation and western blotting. These methods are contingent on having good antibodies, for selective binding to the specific proteins of interest and to provide efficient detection strategies. Dr Sharoar and colleagues used Jackson ImmunoResearch secondary antibodies for reliable protein detection on their western blots and found, in the words of Dr Sharoar, that “they worked at low concentrations and provided consistent results.”  Using this approach, the team was able to quantify changes in biochemical pathways and markers in a variety of experimental approaches modelling AD.

Future perspectives
There is increased interest in the field of AD research to investigate the early pathology, before the formation of the plaques and tangles. Identification of the mechanisms occurring at earlier stages of the disease could provide opportunities for intervention, to cure or slow progression of the disorder. Changes in cellular metabolism, including mitochondrial degeneration, are likely to be early events that precede and promote the protein accumulation pathologies.

Do you use Jackson ImmunoResearch antibodies? Tell us what you think, leave a review today.