Malaria is a disease which causes immense and prolonged suffering in those who become infected with the malarial parasite. In regions where malaria is endemic, such as Africa and large parts of Asia, around 30% of those exposed to the malarial parasite go on to develop the disease at varying levels of severity. The problem is made worse by drug resistance. The malarial parasite has been harnessing the power of evolution to disarm the drugs we have deployed since the 1950s and still does so today.

Dr. Prakasha Kempaiah and his team in Albuquerque, New Mexico in the US, are pushing back the frontiers of new knowledge about host biology and the search for an effective cure. Kempaiah is a geneticist and molecular biologist working as an associate professor of research in the Centre for Global Health (CGH) at the University of New Mexico. Based in the Department of Internal Medicine at the CGH, his research focuses on understanding genetic factors in the human host which lead to a severe disease outcome. Ultimately, he is on a mission to identify the molecules and associated genes that influence disease severity and to target them with new therapies. 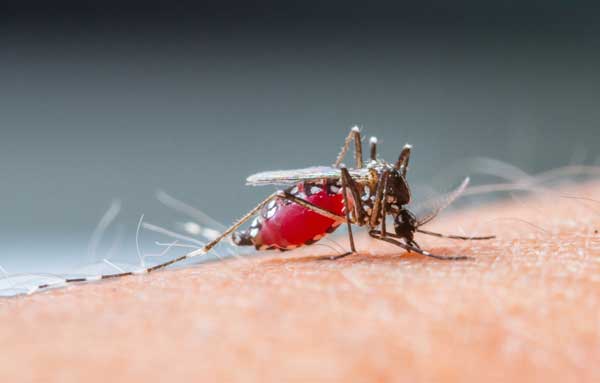 The malaria parasite is transmitted among humans by mosquitoes image copyright: smuay @ 123rf.com

Kempaiah and his team look for genomic and proteomic biomarkers in patients with severe malaria. They also look at mechanisms of immune regulation, and deploy genomics, RNA sequencing and biomolecular discovery approaches to analyse samples of serum, DNA and RNA from patients. In doing so, the team identifies mutations and variants that allow the disease to take hold. This contributes vital knowledge enabling them to construct a ‘therapeutic model’ of affected genes. The work is complemented by drug discovery research elsewhere in the lab, which focuses more traditionally on the malarial parasite itself in an effort to defeat resistance to existing drugs.

Resistance to anti-malarial drugs is a major problem endangering millions of lives in those regions of the world where malaria is endemic. Working in the Kampaiah Lab., graduate student Angela Achieng, has spent the past 6-7 years working on drug discovery for new anti-malarials. She takes numerous approaches to the problem: finding new drugs which exploit metabolic pathways not targeted by current drugs is an obvious route, but the lab also works on drug re-purposing – identifying existing FDA approved drugs used for other conditions which have anti-parasitic activity. In addition, drug combination therapies consisting of conventional and novel scaffolds are also explored in the effort to decrease the development of resistance. Effective and reliable lab equipment is vital for all this and Kampaiah’s team has found NuAire’s NU-540 Class II Biological Safety Cabinet and NU-9668 Ultra Low Temperature Freezer ideal for its requirements.

Tools of the trade

Achieng spends much of her time culturing parasite clones within biosafety level two laboratories, exposing them to test compounds for at least 48 hours so that the full life cycle of the parasite is covered. She uses DNA synthesis as a marker of parasite growth and viability, employing fluorescence techniques (SYBR Green) to measure it in the presence of different drug concentrations. It then becomes possible to determine at which concentrations of a given test compound growth is inhibited in the parasite’s life cycle, at least in vitro. The right technology is essential and Achieng says: “NuAire’s biosafety cabinets and freezers help to maintain a sterile environment for drug experiments.”

Achieng is undaunted by the challenges ahead and asserts with optimism that: “We will improve on existing malarial therapies and minimise or reduce the incidence of drug resistance that has been a problem since the 1950s and that is still a problem right now in 2018.”

It is Achieng’s sincere hope that they can “move towards an efficacious vaccine for malaria.”

Find out more about the research of the Kampaiah lab and how the NuAire biosafety cabinets and ultra-low temperature freezers could help you.