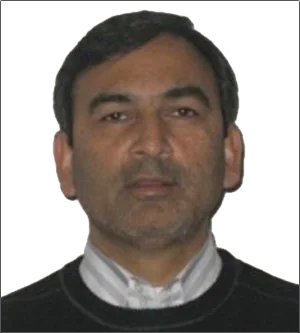 Helper T lymphocytes, key players in the body’s adaptive immune response, help protect the body against external threats, such as pathogens, as well as internal threats such as tumors. Recent findings have suggested that helper T cells are essential for effective cancer immunotherapy treatments. In immunotherapy, drugs typically prompt a set of immune cells, the killer T cells, to attack the tumor. It is now known that additionally recruiting helper T cells could further make immunotherapy more effective, especially in patients that remain unresponsive to the treatment.

In this SelectScience® article, we speak with Dr. Anil K. Bamezai, of Villanova University, whose research focuses on the spatiotemporal signaling of CD4+ helper T lymphocytes, in particular, how membrane components and anchored proteins orchestrate helper T cell signaling after interacting with a foreign antigen.

“These cells have receptors on the cell membrane that recognize a threat, upon which, they get activated. After that recognition, they clonally expand and divide. I'm interested in understanding the process of clonal expansion of these helper T lymphocytes, and also how they cut back the attack after the threat is gone,” explains Bamezai.

“There are two projects in the lab. One looks at Ly-6 proteins that are inhibitory proteins regulating helper T cell responses,” adds Bamezai. “The second focuses on how signals arising from the membrane impart spatiotemporal regulation of T cells.”

As Ly-6 acts as an inhibitor to helper T cells, it has the potential to serve as an immune checkpoint inhibitor in immunotherapy. Checkpoint inhibitors are proteins that, in the presence of a drug, would pause inhibitory functions on T cells, thereby allowing them to attack the tumor and further boost the body’s immune response against cancer.

“All the signaling is integrated on the helper T cell membrane, to begin with. How these different molecules come together in space and time is something we’re interested in. If we’re able to understand the basic aspects of this mechanism, we can enhance or diminish this signal,” says Bamezai. “We would want to enhance the signal in situations where the helper T cells need to kill tumor cells, and diminish it in cases of autoimmunity, for instance, where the T cells attack the body’s own cells.” Understanding the cellular players involved in the spatiotemporal signaling of helper T cells can ultimately help inform therapeutic approaches to enhance the body’s immune response towards tumors.

To study how Ly-6 proteins regulate the activity of helper T cells in attacking tumors, the Bamezai lab uses Ly-6 knockout mice. By transplanting tumors in these mice, the lab members measure the extent of T cell infiltration to attack the tumor compared to wildtype mice. Investigating T cell infiltration involves cell counting techniques. Members of the Bamezai lab isolate helper T cells from both immune tissues such as lymph nodes as well as from the tumors.

The Bamezai lab is currently equipped with the DeNovix CellDrop FL Dual Fluorescence model to obtain accurate cell counts. “We mainly use it for live and dead cell combination, and it works amazingly well. We are beginning to really discriminate between the infiltrated lymphocytes and the tumor cells itself,” says Bamezai. The  lab uses the CellDrop cell counter to automate cell counting and viability counts in seconds without the use of slides. Acridine orange and propidium iodide (AO/PI) fluorophores are used to accurately differentiate live and dead nucleated cells. 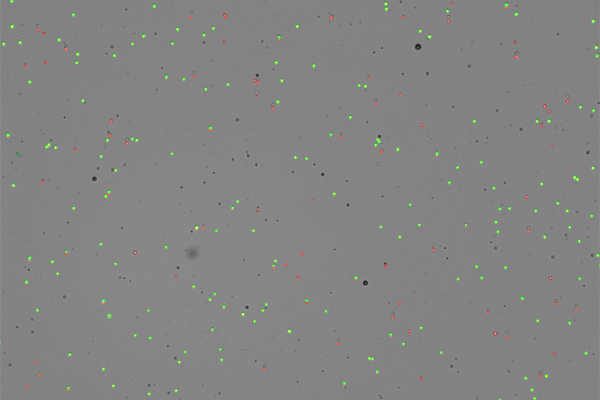 DeNovix CellDrop cell counter image of live and dead cells from draining lymph node of mice with transplanted tumor. Lymph node cells were stained with a mixture of Acridine Orange (AO) and Propidium Iodide (PI) for 3 minutes prior to cell counting. Live (green) and dead (red) cells in the image are counted. Grey entities in the image represent debris which are not stained with AO/PI and not counted.

Immuno-oncology experiments can benefit from using cell counters such as CellDrop due to their ability to identify morphological differences in mixed cell populations, for instance, tumor cells and T cells, using size gating. “We first received the CellDrop in our lab six months ago as part of the DeNovix demo program. We really like how it helps with the workflow,” shares Bamezai. “My students in the lab love it because it's a quick way to quantify both live and dead cells. The workflow is quick, and it does not require any consumable. It’s an initial investment, but for the long run, it is clearly worth investing in.” 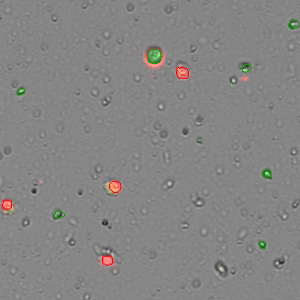 Large, irregular B16 Melanoma tumor cells are counted next to smaller, round tumor infiltrating lymphocytes. The cells were dissected from a mouse melanoma prior to counting on the CellDrop.

The CellDrop can save valuable time for immuno-oncology experiments. It determines the T cell/tumor cell ratio faster than flow cytometers. Bamezai also addresses other aspects of the CellDrop that benefit his lab: “In a lab with many students, it helps us document our results, export the information and keep a record of all the cell quantification data which is very critical for science.”

Manual cell counting, the traditional approach in these experiments, often yields irreproducible data due to human errors and the subjective nature of counting. Automated cell counting can help standardize results across different lab members and projects. “And I would say it's also good for the eyes. No strain on the eyes of the students,” adds Bamezai.

The output quality of any lab depends on the technology choice that supports the research. As the Bamezai lab transitioned from demo to routine use, the CellDrop has helped generate data on recent projects involving Ly-6 protein and helper T cells. Reflecting on this experience, Bamezai says, “If there's any hesitation with adding a new technology to the lab, I would say, get the demo, use it and become familiar with it. I'm sure a demo user is going to get hooked on the cell counter.”

The research group also hopes to collaborate with DeNovix to beta test new apps specifically designed to discriminate tumor cells and tumor-infiltrating T cells. Gearing up to generate more data on the lab projects, Bamezai mentions his future research goals: “Our research is trying to establish Ly-6A as one of the immune checkpoint inhibitors to be used in immunotherapy. Hopefully we can advance from mouse models to preclinical human-mouse hybrid models from here on.”

CellDrop purchase was supported by funds from College of Arts and Sciences, Villanova University.

Find out more about the DeNovix CellDrop cell counter and how it could help your research.