Interactions between analytes, mobile phases and chromatographic materials are fundamental to chromatography. On the best of days, these interactions enable analysts to separate complex mixtures of near-identical molecules with high resolution, good peak shape and excellent reproducibility. However, when unintended interactions occur between the analytes and the chromatographic materials, problems begin to arise for separation scientists. Known as non-specific adsorption (NSA), such unwanted interactions can have a major impact on analytical results, with limited sensitivity, broad peak shapes and poor reproducibility just a few of the hallmarks of this common chromatographic constraint. Metal-sensitive analytes are among those frequently affected, with interactions between these compounds and surrounding column hardware rendering their analysis a significant chore and putting even seasoned chromatographers in a tricky situation. 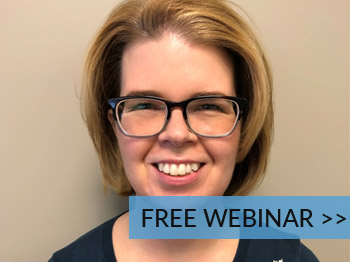 Addressing these challenges in a recent SelectScience webinar, Kim Haynes, principal product marketing manager at Waters, discusses the common causes of non-specific adsorption, the impacts of metal-sensitive analyte loss, and the limitations of existing workarounds, before introducing a new family of technologies and columns that were developed specifically to solve these issues.

Haynes explains how the risks caused by non-specific adsorption can be mitigated with PREMIER and MaxPeak™ High Performance Surface (HPS) Technology from Waters Corporation. Read on to explore how this technology is designed to improve the recovery of both metal-sensitive and non-metal-sensitive analytes and can provide chromatographers with the sensitivity, peak shapes, and reproducibility they need to have complete confidence in their results.

Where did my sample go?

Have you ever injected a sample into a column but couldn’t identify the peak that you’re looking for? Lost your sample altogether? Or observed inconsistent peak areas and high standard deviations between injections? Limited sensitivity, missing analytes and poor reproducibility all point to non-specific adsorption. For metal-sensitive analytes, this is often the result of electrostatic or ionic interactions with the stainless steel LC hardware. Compounds typically affected are electron-rich, often containing phosphate, carboxylate and/or sulfate groups that are attracted to electron-deficient metal oxide surfaces. In general, the higher the number of these functional groups in the analyte, the stronger this attraction and greater the extent of NSA losses, as shown below. 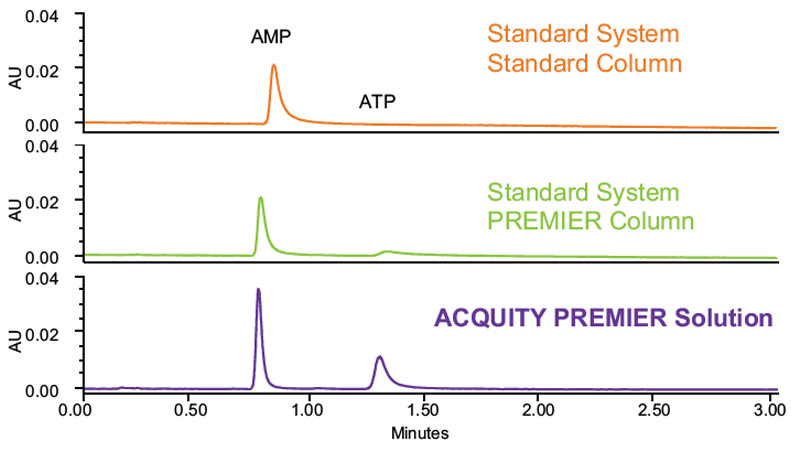 Figure 1. Using an ACQUITY PREMIER System in combination with a PREMIER column can dramatically improve the peak shape and peak area for metal-sensitive analytes such as ATP and AMP. In each experiment, a mixture of ATP and AMP was separated at 20 ng individual mass loads under HILIC conditions using ACQUITY BEH Amide Columns.

The top chromatograph illustrates the degree of NSA losses due to metal interactions during the separation of nucleotides adenosine triphosphate (ATP) and adenosine monophosphate (AMP) within a stainless-steel LC column. Using a standard system and column, the chromatograph shows significant tailing for the AMP peak, while no peak is observed for ATP. This is because the additional phosphate groups in ATP greatly increased NSA losses, ultimately rendering the molecule undetectable using standard technologies. 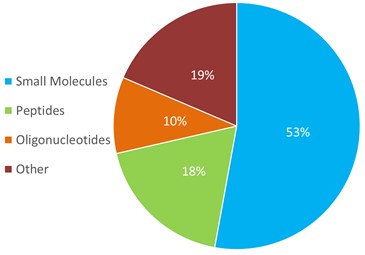 Webinar poll question: Which analyte type do you most often encounter non-specific adsorption?

Low analyte recovery due to NSA can be observed across a large variety of molecules, and the majority of poll respondents reported encountering non-specific adsorption most commonly with small molecules (53%), followed by peptides/other. In some cases, analyte loss can be a mere inconvenience, but in others, such as biopharmaceutical applications, it can be a serious problem.

The ups and downs of workarounds

There are a number of workarounds that scientists use to combat non-specific adsorption, but each comes with additional challenges, as Haynes explains: “One of the things scientists do is to passivate the surface with acid or a sacrificial sample to remove free iron from the steel surface or coat the reactive surface.” However, this process takes hours, even days, and the result is often transient, meaning it requires repeated application, which in turn can lead to inconsistent results between injections. An alternative approach is to use polyether ether ketone (PEEK) in place of stainless steel in HPLC systems and columns. However, whilst this material is unreactive, it lacks the mechanical strength to tolerate ultra-high pressure conditions needed for high-efficiency separations using sub-2 µm particles. A simpler workaround is to add chelating reagents such as EDTA to the mobile phase or sample diluent to mitigate analyte interactions, but these can cause ion suppression and may be difficult to remove from HPLC systems. In short, “these approaches may occasionally work, but none provide a universal solution,” Haynes asserts.

Rising to the challenge, Waters has developed a family of new technologies, named MaxPeak™ High Performance Surfaces (HPS), that are specifically designed to mitigate analyte/surface interactions. The hybrid organic/inorganic surface of MaxPeak HPS effectively deactivates the metal surfaces in a column, preventing them from reacting and interacting with metal-sensitive analytes. “This effectively acts as a barrier between the stainless-steel surface and the analytes which would interact with that surface,” Haynes explains.

As the latest evolution in the ACQUITY Column family, new ACQUITY PREMIER Columns utilize this HPS technology to minimize absorption losses and are designed to provide highly reproducible separations with enhanced analyte recovery, increased sensitivity, and sharper peak shapes for metal-sensitive analytes. The benefits of the technology can be seen in figure 1. In contrast to the chromatograph produced using a standard system and column, using PREMIER columns in combination with the ACQUITY PREMIER System –collectively termed the ACQUITY PREMIER Solution – resolves a sharp peak for ATP within the expected peak area. 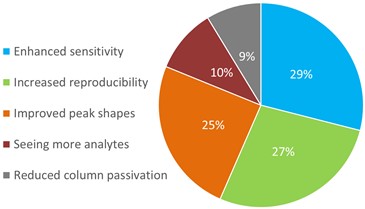 Webinar poll question: Which attribute/benefit interests you most?

Enhanced sensitivity, increased reproducibility and improved peak shapes were selected by poll respondents as the top three criteria of interest when performing chromatographic analyses. By tackling NSA, ACQUITY PREMIER columns can enhance all of these attributes, minimizing risk and providing separation scientists with greater confidence in their results.

ACQUITY PREMIER columns can be packed with a variety of stationary phases, including trusted particles such as HSS, CSH and BEH, and have been shown to provide dramatic improvements in reversed-phase and hydrophilic interaction liquid chromatography for a wide range of analytes, such as organophosphates, organic acids, oligonucleotides, acidic peptides, glycans and phospholipids. As such, they could offer benefits to a variety of applications including the bioanalysis of potential therapeutics, pharmaceutical quality control, metabolomics studies and proteomics investigations. For example, in a recent study[1] that analyzed the oligonucleotide GEM91, a candidate treatment for HIV-1, an ACQUITY PREMIER System and Column was shown to increase peak area 13-fold compared to their standard counterparts. Similarly, the analysis of citric acid demonstrated a 108-fold peak area improvement for the ACQUITY PREMIER Solution versus conventional LC technology[2]. Through improving peak areas, these columns enable more accurate analyte identification and data interpretation, while reducing the time from sample to result.

Notably, the Waters ACQUITY PREMIER Solution addresses absorption problems without time-consuming tasks such as LC system and column passivation, the extensive use of expensive reagents, or sacrificing the benefits of stainless steel. In this way, this approach goes beyond just solving a problem — it’s a means of maximizing results while reducing efforts. “This is a really easy way to mitigate the risks to your analyses that are associated with non-specific adsorption,” concludes Haynes.

Register for our upcoming webinar on Friday, May 7, to learn more about the benefits of MaxPeak HPS technology and the ACQUITY PREMIER Solution for oligonucleotides, peptide mapping, and glycans analyses.

Plus, find more expert resources to advance your LC analyses below:

ACQUITY PREMIER Columns have been nominated for Best New Drug Discovery Product of 2020. Have your say on this year's winner, vote today >>