RNA toxicity due to repeat-containing RNA can cause neurological diseases through gain of function. One such RNA repeat disorder is myotonic dystrophy type 1 (DM1), affecting intellectual abilities and central nervous system impairment, among other symptoms. Although a well-known RNA toxicity disorder, the molecular and cellular pathways affected in DM1 brain remain largely unknown. 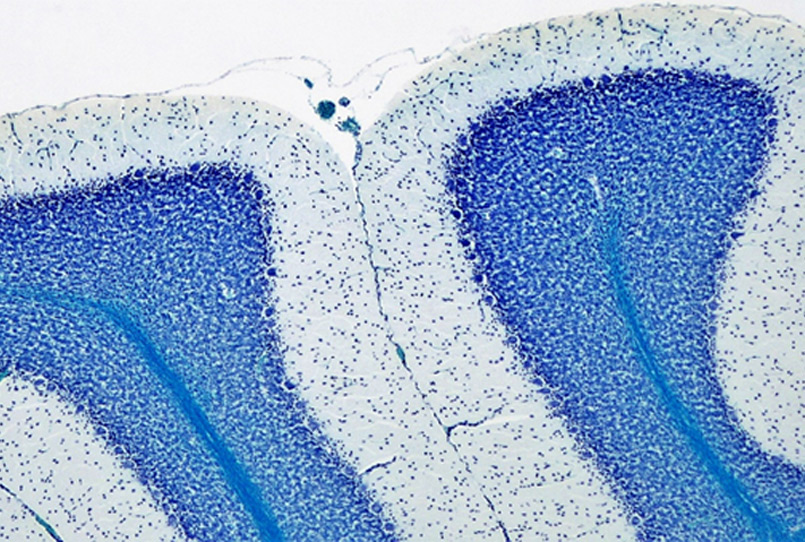 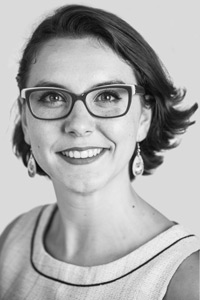 Tell us a bit about your project on DM1.

I was looking at the CTG repeats in a mouse model of DM1, and its impact on neurons and astrocytes. Earlier, members of our lab had discovered that in the cerebellum of the DM1 mouse model, the Bergmann glial cells, which are a type of astrocytes, express very a high amount of the toxic RNA. This was contrary to the neighboring neurons, the Purkinje cells, which express a low amount of toxic RNA. Positioned next to the Purkinje neurons, these Bergmann glia showed abnormal firing and electrical activity. So, my hypothesis was that, as a result of the high levels of RNA toxicity in the Bergmann glial cells and their dysfunction thereof, they impact on the health of neighboring neuronal cells. Testing this hypothesis would help us get closer to understanding the cognitive implications of DM1.

How did you test the hypothesis that the dysfunctional Bergmann glia in DM1 mice were affecting the health of neighboring Purkinje neurons?

In looking for possible molecular mechanisms underlying abnormal communication between neurons and glia in the DM1 mice, I found one particular candidate – the glutamate transporter, GLT1, responsible for clearing glutamate from the synapse. Located in the Bergmann astrocyte, DM1 showed lower expression of the GLT1. This decreased GLT1 expression led to the hypothesis that glutamate was released by the neurons into the synapse, but the astrocytes were failing to clear the excess glutamate, leading to a toxic accumulation of the glutamate at the synapse, and eventually, neuronal hyperexcitability and neurotoxicity.

My aim was to monitor the effects of excess glutamate on co-cultures of primary neurons and astrocytes.

What experiments did you design to study the neuro-glia interaction?

To study neuronal-glial interaction, I used primary neurons and astrocytes derived from a DM1 mouse model that our lab created a few years back. Isolating primary neurons and astrocytes takes time. It was a challenge in the beginning, but once I got my hands on it, it went well. This was followed by immunostaining, after which I would spend hours in the darkroom, imaging. If you do the math, I needed one hour to analyze each sample, multiply that by 3 replicates and 2 genotypes (control and DM1 mice), and 3-6 different time points! That made it a lot of hours and sometimes days taking images and analyzing them.

Time-lapse capture of fluorescently labeled neurons co-cultured with unlabeled astrocytes.  Day 0 in the video corresponds with day 3 in culture when fluorescence becomes visible. Glutamate was added on day 5 in the video, corresponding to day 8 in vitro. Neurons collapse upon glutamate toxicity. Video courtesy of Dr. Diana M. Dincã taken on the IncuCyte.

Yes, you can ask me, "Diana, did you consider video microscopy, which would have been easier?" I tried to. We had a video microscope in the facility that had a small chamber where CO2 and temperature were controlled… or at least they were supposed to be because, unfortunately, I tried many times and each time, the cells died by the end of the six-hour time period. Especially the neurons, because primary neurons are particularly sensitive to the culture conditions.

How did you circumvent the imaging challenge for primary neurons and astrocytes?

I got excited when I heard about the technology of the IncuCyte because, as it was presented to us, I was struggling to find a method to look at the neuro-glia interaction. When I saw the instrument, I knew this was a powerful method to image live cells inside the incubator in a stable environment where my neurons would be happy. I thought, "Oh my god, if I could have this machine, I could do those experiments and it would be great!"

With the new live-cell imaging technology within your reach, what experiments did you perform to study neuro-glia interaction?

I wanted to investigate how well the astrocytes from the DM1 mice protected neurons from glutamate toxicity. I co-cultured primary neurons and primary astrocytes of mixed genotypes, control and DM1 mice. I fluorescently marked the primary neurons using the lentivirus to be able to follow the neurite expansion throughout the culture. I let them develop for eight days in the IncuCyte, and then added excess glutamate to the co-culture and monitored the collapse of the neurites.

The collapse of the neurites is a visual marker of the neurotoxicity. In line with my hypothesis, the result demonstrated that the astrocytes from the DM1 mice failed to protect the neurons against the glutamate excitability. So, indeed, the neurites collapsed faster in the presence of DM1 astrocytes expressing the toxic RNA.

I, again, went one step further to perform a rescuing experiment by over-expressing GLT-1 in the astrocytes of DM1 mice. This led to the abolishment of the neurite collapse.

Taken together, these results obtained using the IncuCyte were strong evidence of neuronal excitotoxicity in DM1 due to downregulation of GLT1 in the astrocytes. This helped me publish the data last year in Cell Reports. 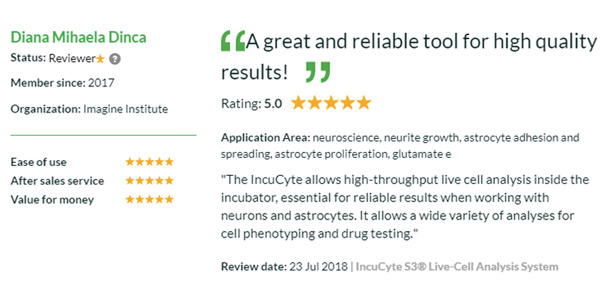 Dr. Diana M. Dincã shares her experience with the IncuCyte on SelectScience. You, too, can leave a review here.

How did the IncuCyte help with your experimental design?

The IncuCyte improved my experiments enormously, both in speed and accuracy. Once I began using the IncuCyte, I didn’t have to spend time taking images myself – the IncuCyte would do the job for me, as I did other experiments in parallel.

As you can imagine, in studying neuro-glia interaction, I used four combinational genotypes – DM1 astrocytes with control and DM1 neurons; control astrocytes with control and DM1 neurons. I tested different concentrations of glutamate, different combinations of neuronal glutamate receptor antagonists, and different methods to over-express the GLT-1 transporter in astrocytes. I would not be able to do all these different experiments without high-throughput, live-cell monitoring inside the IncuCyte incubator in a controlled environment.

As the cells were being imaged inside the incubator, I could follow them for much longer. So, I went from, for example, five time points covering a week of neuronal culture to eight time points per day covering two weeks of neuronal culture to monitor the growth of the neurons.
Finally, I could test many more samples in the 96-well plate than in an 8-well microscope slide that I was using earlier. I was able to test more replicates for genotypes and more test conditions. The IncuCyte imaged a larger surface, so I got a much more representative view of what was really happening in each well.

What are the future implications of your findings?

DM1 is a complex disease. All around the world, the DM1 research community is putting a lot of effort into finding a treatment or at least envisioning to slow down the progression of the disease. Our results suggested that, in the future, it might be possible to intervene pharmacologically using drugs to treat some of the symptoms related to the central nervous system and improve the quality of life of the patient.

There are other questions that remain to be answered. For example, how are other brain cells, such as oligodendrocytes and microglia, affected at both molecular and cellular levels in DM1, how are these cells affected in different brain regions and what's the impact on the symptoms. And, of course, what we find in one disease due to a triplet repeat can be adopted to other triplet repeat expansion disorders such as Huntington disease and many other microsatellite disorders.