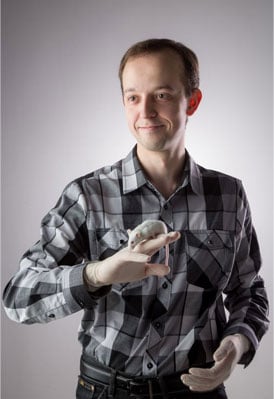 Using nanoparticles as drug delivery vehicles enables greater precision in cellular targeting and compound release compared to conventional drug delivery systems. Oftentimes, nanoparticles are shown to outperform molecular agents in in vitro studies. However, when tested in vivo, these nanoparticles are rapidly eliminated from the bloodstream by the mononuclear phagocyte system (MPS), rendering them ineffective despite their capabilities.

In this SelectScience interview, we speak with Dr. Maxim Nikitin, Head of the Nanobiotechnology Laboratory at the Moscow Institute of Physics and Technology, a multiple award-winning scientist, on his laboratory’s recent findings on prolonging nanoparticle time in vivo by circumventing MPS.

“One of our projects is devoted to overcoming the main challenge of nanoparticle application in vivo, namely, prolonging blood circulation of nanomedicines,” Nikitin says. His lab focuses on different life sciences applications of nanoparticles, ranging from point-of-care diagnostics to targeted drug delivery.

“In our recent publication, we proposed a new “MPS-cytoblockade” technology, which allows a universal increase of blood circulation of virtually any nanoparticle without the need to modify its surface,” Nikitin explains. “We achieve that by gentle and transient blockade of the organism’s phagocytic system by antibody-induced depletion of erythrocytes.”

Long-time researchers in nanotechnology, Nikitin’s team was aware that using ‘stealth’ approaches to coat nanoparticles with PEGs, one of the earlier methodologies proposed to increase their circulation time, was ineffective as it hindered their performance. So, with the goal of requiring no surface modification, the team came up with the concept of MPS-cytoblockade. By forcing the MPS to enhance clearance of ‘self’ blood cells, nanoparticle clearance can be competitively suppressed, thereby prolonging their time in circulation. Administering allogeneic anti-erythrocyte antibodies showed over 30-fold increase of nanoparticle circulation half-life. The findings were published in Nature Biomedical Engineering in July 2020.

Nikitin’s work in nanotechnology and developing nanobots towards diagnostics has received a number of prestigious awards, including ‘The Falling Walls Young Innovators’ award and the Presidential Prize in Science, personally presented by Russian President, Vladimir Putin.

In studying in vivo performance of nanoparticles, the Nikitin lab requires modern technologies to investigate how nanoparticles interact with cells and other molecules, including recognition or binding mechanisms. The team uses the CellStream® Benchtop Flow Cytometer and the Amnis® ImageStream XMk II by Luminex to perform these analyses.

“One of the main advantages of CellStream is the presence of seven excitation lasers and six filter channels that cover the whole spectrum. Since we develop nanoparticles loaded with different fluorescent dyes that are often custom-made, knowing that we can detect anything we develop without buying new filters is great for us,” says Nikitin.

While the Amnis ImageStream imaging flow cytometer is used to capture detailed images of the cells passing through the flow cuvette, the CellStream offers higher throughput data acquisition, 10X faster than the ImageStream, to enable rapid experiment optimization. “Having both the CellStream and ImageStream in our lab gives an additional advantage. After we’ve screened a range of samples with CellStream, we study the “optimized” samples in ImageStream to further prove our point by direct visualization. The combination of these devices yields a much more detailed understanding of the particle-cell interactions,” explains Nikitin.

Choosing the appropriate technology for accurately studying nanoparticles is critical when examining their in vivo behavior which can have direct clinical applications in the future. “Nanoparticle-containing samples are generally more challenging than regular cell samples as they tend to agglomerate, often changing the forward scattering (FSC) and side scattering (SSC) parameters in flow cytometry. Therefore, when using a conventional flow cytometer, it is often unclear what population is being examined,” notes Nikitin. “ImageStream, however, allows us to directly visualize the sample and ensure that everything is OK to move ahead. It gives us truly unique and unmatched information about the sample.”

With parallel projects underway in the Nikitin lab, the team hopes to extend these in-house technologies to other applications. “Both devices have a good resolution in terms of size of the non-fluorescent particles,” says Nikitin. “Although we have not yet used the devices to study the changes in particle size, it seems that both devices would be able to deliver some benefits over dynamic light scattering and nanoparticle tracking analysis.” The research group is also currently working on smart “biocomputing” nanomaterials that facilitate targeted drug delivery by identifying in vivo targets through molecular computation and response to physical cues in the target’s microenvironment.

In the future, Nikitin hopes for the technologies developed in his lab to become commercialized into a product that can serve healthcare either through therapeutics or diagnostics. “We work towards developing technologies that are truly trying to break the walls in drug discovery,” mentions Nikitin. In determining the direction of his research, Nikitin always remembers why he started: “After high school, I was torn between pursuing computer science and biology. I quickly learned that most IT projects offer solutions to problems that we don’t even know we have yet. Biomedicine, on the other hand, is trying to address problems that we’ve been thinking about since the beginning of civilization: how to stay healthy. So, I chose biology.”

Nikitin hopes to approach all of his future projects in nanotechnology with a fresh perspective, one that is far from mainstream science. That, he believes, is the secret to finding unconventional solutions in drug discovery.

Do you use Luminex products in your lab? Write a review for your chance to win a $400 Amazon gift card >>