Editorial Article: Centrifugal partition chromatography: The separation ‘underdog’ that deserves a place in your lab 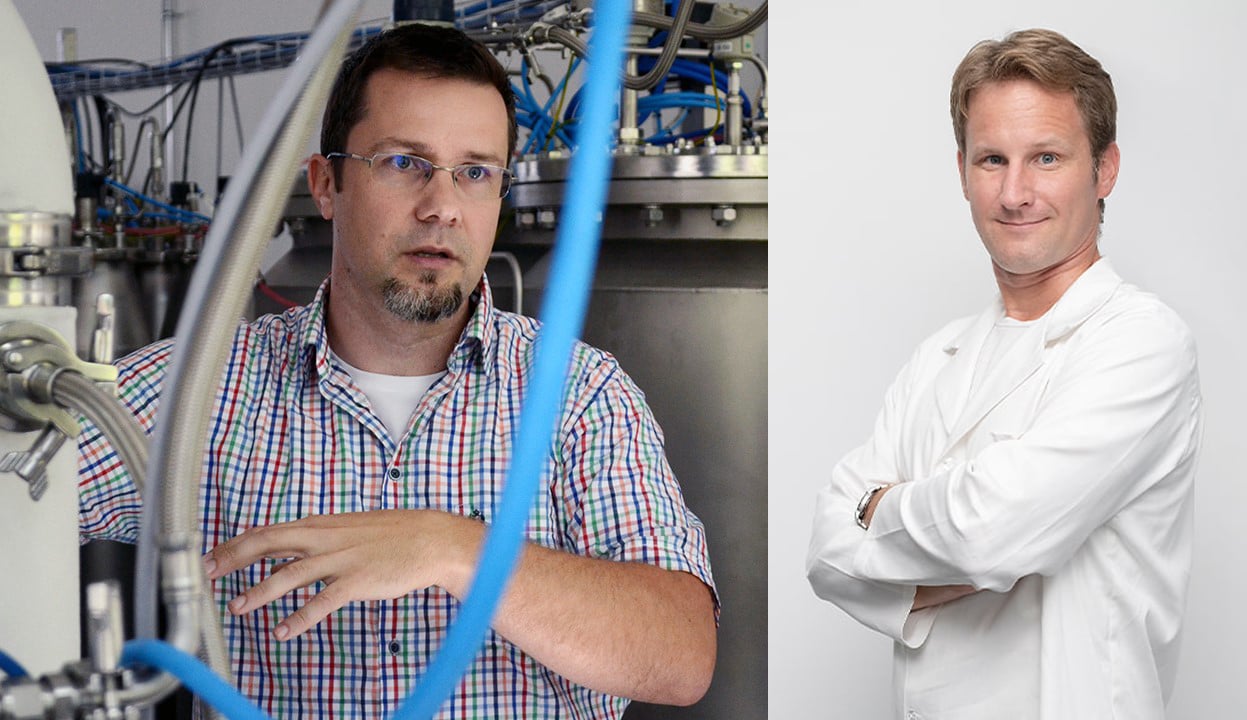 Dr. András Gáspár (left) and Dr. Árpád Könczöl (right) from Rotachrom tell us about the pilot-scale rCPC, the lesser-known technique missing from your analytical toolbox

Analytical and preparative laboratories around the world with very versatile objectives rely on HPLC-based techniques for separating targets from matrices. This setup, based on decades of experience, creates comfortable methods and rapid screening. However, when it comes to scale-up (in traditional batch-to-batch operation mode) or scale-out (in continuous production schemes), the advantages of these techniques are less pronounced and laboratories require alternative solutions, especially when scaling up or out to commercialize target products. Another lesser-known and under-utilized separation technique – centrifugal partition chromatography – has the potential to resolve this in a resource-efficient and painless manner.

In this article, we speak with the leadership team at RotaChrom, a company specializing in centrifugal partition chromatography, about the promise and potential of this analytical underdog.

“CPC is a relatively old technology. However, it remains under-used among separation scientists,” says Dr. András Gáspár, Chief Product Officer at RotaChrom. “We are working on creating awareness for this technology because we truly believe it has the potential to complement traditional separation techniques.”

A liquid-liquid chromatography method, CPC uses the principles of partitioning where analytes are isolated based on their differing partition coefficients in the two-liquid system. The stationary liquid phase is fed into the rotor while it spins and retains the liquid with centrifugal forces. The other liquid, the mobile phase containing the analytes, is fed under pressure and pumped into the stationary phase.

CPC is typically used to separate, purify, or prepare samples before traditional chromatography methods are employed for a higher resolution of separation. Such a workflow allows bulk samples to be processed faster and in a cost-effective manner using CPC, instead of relying on high-cost HPLC platforms that are relatively slower and more prone to breaking down under high-throughput pressure.

We’re able to use the retention volume equation to precisely predict the chromatogram even before separation. This predictability of CPC makes scaling or transferring the method much easier.

The benefits offered by CPC directly stem from the liquid-liquid nature of the technology. “In CPC, the stationary phase is also in the liquid state. This means it provides a large stationary phase ratio compared to other solid-support technologies. It is the liquid-liquid aspect that imparts a high ‘holdability’ of analytes, a high capacity for separation and robustness of operation,” explains Dr. Árpád Könczöl, Lead Scientific Officer at RotaChrom.

“Additionally, the mechanism of separation is really simple,” Könczöl continues. “It’s based on the partition behavior of the compounds in the mixture. So, we’re able to use the retention volume equation to precisely predict the chromatogram even before separation. This predictability of CPC makes scaling or transferring the method much easier.”

A high level of solvent flexibility is another advantage of CPC that helps reduce operational costs in industrial applications. “With CPC, a wide range of solvents can be used. The chemical space to adjust solvent selectivity is much higher in CPC compared to any other technology in the chromatography realm,” shares Gáspár. “This kind of flexibility is rarely provided in column chromatography, and if it is, it comes at a high cost of consumables. When a team is focused on a high-value target, the cost of consumables becomes pretty expensive. Using CPC for downstream separation can be more cost-effective.”

CPC applications span a diverse portfolio of analytes in the pharma industry, including small-molecule drug compounds, natural products, medicinal chemistry workflows, fermentation-based biotechs, and extracts for the food and beverage sector, among others.

Why consider CPC over column chromatography

Given that column-based chromatography methods dominate in most analytical labs, what are tangible operational reasons for teams to consider CPC techniques? The RotaChrom team weighs in:

“As we don’t use any solid material in the system – only liquid – when something goes wrong, you can simply flush out the whole system,” says Könczöl. “The problem of clogging that is common with columns is practically eliminated in CPC.”

Gáspár adds: “The CPC system is unaffected by the cleanliness or ‘grade’ of the solvents used. As there is a significant price markup for HPLC-grade materials, if column chromatography is used, this can increase the cost of the entire process. Using CPC as an downstream alternative can cut costs.”

For industrial teams making a move from batch production to continuous manufacturing, CPC has the capacity to provide both operation modes on the same instrument. Meanwhile, achieving continuous manufacturing with column chromatography can be rather challenging, especially when regulations need to be met. “CPC is incredibly versatile,” notes Gáspár, “not only in the different fields of application or types of solvents but also in operation modes.”

The art of scaling chromatography: Transitioning from lab to production

Progressing directly from the R&D stage to the industrial production stage can drain significant resources for the team. That's why it’s necessary to have an interim step. We call this the pilot-scale.

When teams are ready to scale up their process at the end of the preclinical phase, just before venturing into clinical research, they may need to consider producing larger quantities of the active pharmaceutical ingredient (API), sometimes in the range of kilograms. At this scale-up stage, a key bottleneck is being able to also scale the chromatographic set-up.

“Linear scale-up is easy to explain but very difficult to implement,” says Gáspár. “Progressing directly from the R&D stage to the industrial production stage can drain significant resources for the team. That's why it’s necessary to have an interim step. We call this the pilot-scale.”

The pilot-scale, according to RotaChrom, falls between the R&D and industrial production stages, and typically utilizes a tool that provides enough evidence and self-confidence to the end user that reliable scale-up is possible. The rCPC platform by RotaChrom is designed to serve this very purpose – for pilot-scale tasks of all batch sizes, small or large.

“The pilot-scale rCPC platform is integrated with software tools that focus on optimizing the entire process, even beyond the method,” says Gáspár. “Which means, if a user wanted to reach continuous operations or minimize downtime, it’s possible to fine-tune the entire system in the most efficient way.”

Working alongside industry experts to reduce delays and costs

Onboarding a new analytical instrument is much more than just that – it involves changing existing workflows, adding new protocols, assessing risks and costs, and preparing the entire team for deployment. Collaborating with trusted experts for such a major undertaking can minimize risks and shorten timelines.

“We don’t just supply CPC instruments to our clients but actively engage in discussions about their analytical needs,” shares Gáspár. “While our scientists help with method development and optimization, we have other teams assessing site readiness, regulatory specifications, throughput rates, and operational costs. We understand that chromatography is a big investment for a lab from a business standpoint, and we do our best to reduce upfront risks and maximize long-term success.”