Average Rating: 4.7
|
7 Scientists have reviewed this product
5 out of 5
Ease of use
5 out of 5
After sales service
5 out of 5
Value for money
Write your own review

"The protocol included with the Zymo-Seq RiboFree Total RNA Library Kit is easy to follow and requires fewer steps than other commercially-available kits I've used. We've been able to save both time and money with this kit. The universal ribosomal depletion step is very effective. The only downside is that we found that we have to use 16 cycles in the last step to achieve optimal molar concentrations of our libraries. "

"We have been using this kit for RNA seq libraries for all of our recent projects. It is reliable, easy to use, and much more cost-effective than some of the other big-name products out there. We have gotten excellent results after QC and have published our work. The customer service and technical service are great and they run some good promotions. I can also recommend the RNA extraction kits. "

"The kit instructions are very well written so that it's easy to follow the procedure. Moreover I had a doubt about the rRNA depletion incubation time (because some of my samples had low RNA concentrations), I wrote to the support and their reply was fast and useful."

"We had a great experience in using this specific sequencing library kit. We tried the free trial kit with great success. Despite some technical issues with the protocol due to some inaccurate descriptions in the manual, Zymo was very kind and highly supportive to replace the wasted kits. The tech support was always very responsive. We have successfully generated RNA-Seq libraries for a good number of RNA samples and have done sequencing with Illumina NovaSeq (150bp PE) or NextSeq (75bp PE) platforms with great sequencing yields. The ribosomal RNA removal part is very easy to do with either human or mouse RNA using the same protocol. Both sequencing platforms have generated consistent and excellent sequencing reads with high quality. The sequencing work was done with our internal core or external commercial vendors. The unique dual index worked very well and the samples were covered equally. We highly recommend this special and easy kit for Total RNA-Seq."

"The kit was very easy to use as the protocol is very well written and easy to follow. I used it for extracting bacterial RNA from honey bee guts and it worked very well, especially for the samples in which the bacteria concentration was higher."

"We had a mixed sample of RNA from a fungal and bacterial biofilm and usually we would have to do poly A enrichment or ribo-depletion or a combination of both, but this kit made it so much easier. The flexible input amounts helped when we had samples with lower RNA content compared to others. The workflow had a lot of touch point but not many more than the TruSeq RNA. Data quality was great, however we did not incubate long enough to remove our rRNA so we had more rRNA than we wanted for the final sequencing run. I only wish the instructions were a little more clear."

Amazing kit that I would recommend to everyone.

"This is probably the best RNA-seq library preparation kit I’ve used (and I have used many). It is very simple and gives clean, reproducible results at a very affordable price. I would highly recommend this product to anyone looking for a quicker and easier library preparation kit. Zymo has never let me down."

Zymo-Seq RiboFree Total RNA-Seq Library Kit is the fastest, easiest RNA-Seq library prep kit available to make stranded, total RNA libraries. The automation-friendly protocol minimizes hands-on time to generate sequencer-ready, stranded, indexed libraries depleted of rRNA and globin in as little as 3.5 hours. Depletion of ribosomal RNAs (which can comprise as much as 90% of a total RNA sample) is completely integrated into the workflow, using a novel, probe-free technology that removes rRNA, globin, or any other over-abundant, repetitive transcript from any sample type or species. RiboFree Universal Depletion is validated across biological kingdom and phyla, including human, rodent, plant, and various prokaryotes, as well as RNA from a wide range of sample types including cells, tissue, FFPE tissues, and whole blood, eliminating the need to select sample-specific modules for different sample types. Just one total RNA-Seq library prep kit to deplete them all. Because the RiboFree Universal Depletion is probe-free, researchers using the Zymo-Seq RiboFree Total RNA Library Kit will avoid transcriptome profiling bias found in other methods. High concentrations of rRNA-binding oligonucleotides used in probe-based approaches also bind to a significant number of non-ribosomal targets. As much as 20% of the 20,000 protein-coding genes in the human genome are significantly biased by these methods. In contrast, the probe-free depletion developed by Zymo Research uses only abundant pre-existing transcripts for mismatch-free enzymatic removal of rRNA and globin, resulting in minimal off-target effects as low as 1.8% in all protein-coding transcripts. This total RNA-Seq library prep kit’s protocol is fragmentation-free and works with up to 2 ug of undepleted total RNA, down to 50 ng of undepleted total RNA, or as little as 5 ng of ribosome-depleted RNA samples. Pre-mixed reagents are ready-to-use at every step, eliminating the need for manual master-mix preparation. Everything needed to make sequencing-ready libraries, including indexing primers, SPRI beads, and magnetic bead stand are included in the kit. It’s RNA-Seq made simple. 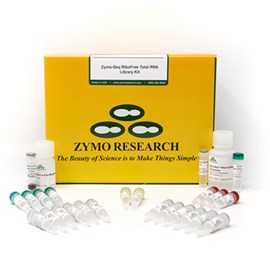