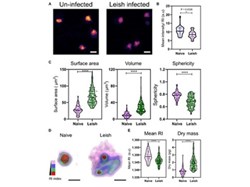 Tomocube’s cutting-edge 3D quantitative phase imaging is set to play a crucial role in platelet research according to a new paper from scientists at the University of York. Using holotomography images generated by the Tomocube HT-2H microscope, the team was able to identify and quantify, in unlabelled live platelets, clear disparities in activation status and potential functional ability in disease states, without experimental interference such as from fixation or labeling.

The ability to use minute volumes of blood is often a vital consideration in platelet research, where mouse platelets are commonly substituted for human platelets. Although they provide an excellent experimental model for functional comparisons, traditional methods of studying platelet phenotype, function, and activation status rely on using large numbers of whole isolated platelet populations. The large volumes required severely limits the number and type of assays that can be performed with mouse blood.

According to Aubrey Lambert, Tomocube’s Chief Marketing Officer, “Platelet biology has benefited from advances in super-resolution imaging and the quantitative information provided about the internal structure and cell function. However, fluorescence-based imaging almost always requires samples to be genetically modified or immuno-labelled to provide the contrast required for visualization. In this study, Tomocube’s 3D holotomography imaging technique eliminates the need for labelling or post isolation processing and enables alterations in cell morphology and changes in biophysical parameters of unaltered cells to be studied and compared in healthy and diseased platelets.

“Also, standard in vitro functional assays, such as lumi-aggregometry or western blotting, demand many platelets and, as a result, researchers are often limited to a single assay for each mouse. The assays outlined at York require just 10ml to sample 100–200 platelets at single-cell level to generate quantitative information relating to platelet morphology and RI/dry mass. Therefore, holotomography can serve as a valuable additional or complementary technique to other in vitro platelet function assays.”

Platelets play a key role in maintaining haemostasis and preventing excessive blood loss following injury, rapidly activating to form a platelet plug to reduce blood loss and initiating secondary haemostasis to promote the formation of a stable fibrin-rich thrombus. More recently, they have also been implicated in innate immunity and inflammation by directly interacting with immune cells and releasing pro-inflammatory signals. It is likely therefore that in certain pathologies, such as chronic parasitic infections and myeloid malignancies, platelets can act as mediators for haemostatic and proinflammatory responses.