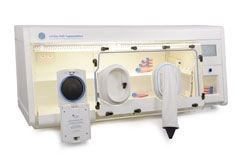 With Hypoxystation cell culture workstations now being sold in 23 countries throughout the world, Don Whitley Scientific Limited has launched a new addition to the range – the Whitley H45 Hypoxystation. The H45 has 50% more capacity than the H35 Hypoxystation but maintains the ability to create hypoxic and anoxic conditions within a controlled and sustained workstation environment. Designed for researchers wanting to accurately control oxygen, carbon dioxide, temperature and humidity, the H45 has two sleeved ports on a removable front plus one patented Instant Access Port, and has sufficient space to use a variety of equipment inside the chamber.

Having three portholes provides better access to the entire incubation and working areas of the chamber. The additional chamber capacity leaves space for equipment such as microscopes and cell imaging systems to be used whilst still having the room to marshal samples efficiently.

The removable front facilitates thorough cleaning and the transfer of bulk samples or larger pieces of equipment for use in the workstation. A built-in rapid airlock ensures samples can be transferred into the workstation atmosphere as soon as possible (the cycle only takes 60 seconds).

UK manufacturer, Don Whitley Scientific, has pioneered color, touch-screen control panels for laboratory workstations. The H45 features such a touch screen, which makes it much easier to use and provides a visual display of parameters including airlock cycle status.

A range of options and accessories are available to tailor the Hypoxystation to a user’s specification, such as the fully automatic humidification system, which enables moisture to be added whilst maintaining a sterile environment.