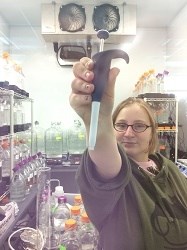 Researchers at the University of Alaska Fairbanks are using a METTLER TOLEDO Rainin Pos-D™ positive-displacement pipette to investigate the role of chemical dispersants in the biodegradation of oil in Arctic marine environments.

Taylor Gofstein, a PhD student, explained: “Little is known about the fate of oil or oil spill response chemicals – like dispersants – in Arctic waters, since most studies regarding dispersants are performed in temperate regions. There is currently a pretty hot debate in the environmental microbiology community about the role dispersants play in the biodegradation of oil; one hypothesis suggests that they increase bioavailability to microorganisms – speeding up the process – while a few researchers suggest they are degraded in preference to petroleum contaminants, slowing the process. This is a key question we are interested in answering, and we recently performed a major incubation experiment using Arctic seawater.”

“Starting with 250 liters of water from just off Barrow – the northern-most point of the USA – this investigation included 180 one liter bottles and 165 stirrer plates. Our target was to achieve an oil-in-water concentration of around 50 ppm, requiring just 47 μl of crude oil per bottle. Pipetting oil accurately with a traditional air displacement pipette would be an exercise in futility, so we were lucky to have a Rainin Pos-D pipette available for this work. Unlike with some other positive-displacement pipettes, the Rainin tips come pre-assembled, meaning we can autoclave them and just use them as we would for a standard pipette, without worrying about sterility and contamination. The pipette is also ergonomically designed and has a very smooth mechanism, making it quick and easy to use.”