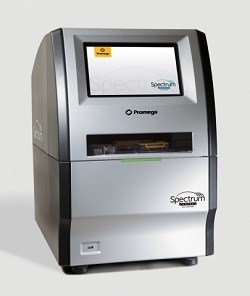 The Spectrum Compact CE System allows laboratories of all sizes the freedom to carry out single nucleotide polymorphism, PCR sizing and microsatellite analysis, de novo sequencing, NGS validation, and mutation detection. This benchtop CE instrument runs up to 32 samples at once and features 4-capillary, 6-dye detection along with an integrated touch-screen for instrument operation. Plug-and-play prefilled reagent cartridges with a guided software user interface brings capillary electrophoresis capabilities to the hands of any scientist in the laboratory regardless of skill level or expertise.

“This opens new possibilities to scientists seeking high quality DNA detection on a smaller scale,” says Doug Storts, Head of Research - Nucleic Acid Technologies at Promega. “This system supports the unique workflows of the lab versus the lab needing to batch samples as a work around and cost savings measure when using a high throughput instrument or service. When we ask for early input from labs worldwide, the consistent response we get from scientists is ‘thank you’.”