The module will deliver an output power of 2 watts at a wavelength of 8.6 μm, making it ideal for laser micromachining of fluoropolymer resins 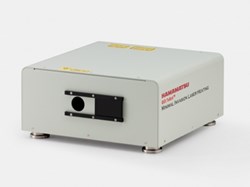 Hamamatsu Photonics has developed a high-power QCL module that delivers an average output power of 2 watts at a wavelength of 8.6 micrometers (1 micrometer or μm is one-millionth of a meter).

This high power QCL module was created by applying their unique beam combining technology, with quantum cascade lasers (QCL) , developed based on new heat dissipation technology. This QCL module combines mid-infrared light beams emitted from two QCLs to boost the output power to a level ideal for micromachining of fluoropolymer resins, such as polytetrafluoroethylene (PTFE) that are used for high frequency device substrates, and a vast range of vehicles and transportation machinery.

Other potential applications for this QCL module include medical treatment and healthcare.

This new module was designed and developed as part of a project called “Development of Advanced Laser Processing with Intelligence Based on High-Brightness and High-Efficiency Next-Generation Laser Technologies” supported by NEDO (New Energy and Industrial Technology Development Organization), a major national research and development agency in Japan. They are planning to exhibit this QCL module at the NEDO booth at the OPIE ’21 (OPTICS & PHOTONICS International Exhibition 2021), Japan’s largest optoelectronics exhibition which will be held at the Pacifico Yokohama (Nishi-ku, Yokohama, Japan) for 3 days from Wednesday 30 June to Friday 2 July 2021.