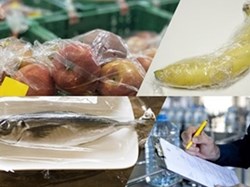 Food wrap film, also known as cling film or plastic wrap, is widely used for food processing and packaging, leading to the risk that plastic might be introduced as a foreign matter into food items. While some food processing companies have switched to using Low-Density Polyethylene (LDPE) food wrap for environmental reasons, many still make food wrap from PVDC (Polyvinylidene Chloride). Since food wrap from a variety of sources is used at different stages during the manufacturing of food items, the ability to discriminate between food wraps made by different manufacturers could help identify a source of contamination. While FT-IR is a frequent choice for rapid analysis of foreign matter, it was found in this case that it could not discriminate between PVDC films made by different manufacturers.

By studying the different additives used in these PVDC films the ionRocket DART®-MS analytical method is shown to be a rapid and effective tool for not only the detailed examination of foreign object contamination pathways but also for QC and forensic discrimination.

The ionRocket is a temperature-heating device for direct thermal desorption and pyrolysis of samples, prior to ionization and analysis by mass spectrometry. Using ionRocket a temperature gradient from ambient up to 600ºC can be achieved in just a few minutes. This enables plastics to be pyrolyzed and then introduced into the DART®-MS gas stream.