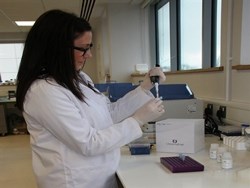 Focusing on the precipitation of epigenetic marks from primary endometrial stromal cells, researchers have produced excellent enrichment of high abundant epigenetic marks from 1 million cells isolated from a tissue biopsy. The selective enrichment using Chromatrap was highlighted by the selective amplification of both positive and negative gene targets relative to negative IgG. Further the work described demonstrates how the Chromatrap ChIP Assay Kit is able to delineate the balance between active and repressive associated marks and also is compatible with human tissue.

Chromatrap® uses a solid phase porous polymer functionalised with protein A or G, allowing much greater chromatin and antibody capturet than bead based methods. The Chromatrap spin column approach offers significant advantages compared to traditional methods based on sepharose or magnetic beads, which involve many steps of separation, pipetting and re-suspension. Independent tests with Chromatrap demonstrate the reproducibility of the assay and the strong fold amplification above negative IgG background, enables the targeting of both abundant and low abundant marks at multiple gene targets. Levels of DNA pull down are up to 25 times higher than with traditional bead based procedures and top performance even with samples as small as 50ng-3000ng chromatin per immunoprecipitation enables Chromatrap to be used on small scale biopsies .