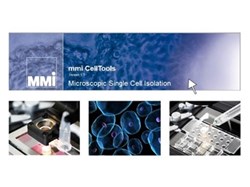 MMI has launched their latest development, the MMI CellTools 5.0 software platform.  With more than 25 years of customer-focused innovation and continuous improvements, the software is now easier and more straight-forward to use. Importantly, it provides higher image quality and facilitates more precise sample acquisition than ever before.

MMI provides proprietary technologies for microscopy-based single cell isolation, such as the MMI CellCut for Laser Microdissection, the MMI CellEctor for capillary-based and selective isolation of cells from suspension or live cell cultures, and the MMI CellManipulator to quantify biological forces.

The software platform MMI CellTools is an integral part of all MMI instruments. The software is designed to control the microscope platform as well as all above-mentioned MMI systems in individual tool bars. In addition, the MMI CellExplorer, a software toolbox for automated cell recognition, can be implemented into the MMI CellTools package.

Now, MMI launched a new version of the CellTools software package. It comes with a new interface style, perfectly suited for fluorescence applications which benefit from the dark design. Previously individual handling steps are now automatically performed by the software supporting straight-forward and intuitive handling. Several new features enable for higher image quality, such as the CMOS camera support, as well as for improved image and video documentation of your precious sample. Moreover, the autofocus tool and focus map with unlimited number of interpolation points for uneven samples now provides highest precision in depth.

In April 2018, the MMI CellTools software package has been extended by the novel MMI CellScan module. The MMI CellScan seamlessly integrates into CellTools platform to combine Laser Microdissection and Whole Slide Imaging to feature novel applications and improved workflow for digital pathology and precision medicine.

Dr. Stefan Niehren, CTO at MMI, has been working on the software for several years already but never stopped further improving it: “With our CellTools software platform, we have been providing the interface for easy and precise single cell isolation from tissue and suspension. The novel features make this process even more effective for all our users!”

Have you used any MMI products? Write a review today for a chance to win a $400 Amazon voucher!