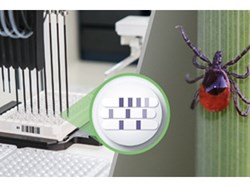 Lyme disease immunoassays from EUROIMMUN are based on targeted combinations of native and recombinant antigens, including early- and late-stage markers and exclusive designer antigens. Diverse assays for the screening and confirmatory steps are complemented by CSF assays for neuroborreliosis diagnostics and flexible automation solutions for all tests.

What is Lyme disease?

Lyme disease is a seasonal tick-borne bacterial disease caused by human pathogenic Borrelia species. It occurs most frequently in the spring and summer months in temperate regions of the northern hemisphere. The most clinically relevant Borrelia species depending on the region are B. afzelii, B. garinii, B. burgdorferi sensu stricto, B. spielmanii and B. bavariensis, which are collectively referred to as B. burgdorferi sensu lato.

Typical initial symptoms of Lyme disease are the skin rash erythema migrans and unspecific flu-like symptoms. The infection can subsequently spread to the joints, heart and nervous system. Early diagnosis and prompt treatment with antibiotics is important to avoid long-term sequelae such as neuroborreliosis and arthritis. Alongside patient anamnesis and clinical findings, serological detection of anti-Borrelia antibodies plays an important role in the diagnosis of Lyme disease.

VlsE: Antibodies against VlsE (variable major protein-like sequence, expressed) are present in 85% of cases and are an indispensable biomarker for Lyme disease. VlsE is a changeable Borrelia surface protein which plays a key role in the pathogen’s evasion of the host immune response. The bacteria do not express VlsE when cultivated, therefore for diagnostics the antigen must be produced in recombinant form.

OspC: Antibodies against OspC (outer surface protein C) are an early diagnostic marker and are detected in up to 90% of acute infections. The antibodies target the dimeric form of OspC. EUROIMMUN has developed a patented recombinant dimeric OspC advanced antigen, which provides higher detection specificity than conventional monomeric antigen at the same sensitivity as native OspC.

Other antigens: Further biomarkers in Borrelia diagnostics include antibodies against p39 (BmpA), p83, p41, p58, p21, p20, p19, p18 and immunogenic lipids. EUROIMMUN has developed designer versions of many of these antigens with increased immunoreactivity to boost the antibody detection efficiency.

Antibody detection in Lyme disease diagnostics is based on a two-tiered strategy. This approach is recommended, for example, by the German Society for Hygiene and Microbiology, the Robert Koch Institute (Germany) and the Centers for Disease Control and Prevention (USA).

In the first diagnostic step, patient sera are characterised using a sensitive screening test such as ELISA or chemiluminescence immunoassay (ChLIA). Both IgM and IgG are measured.

ELISAs based on native whole extracts from different Borrelia species provide especially high sensitivity due to the broad antigen spectrum encompassing all diagnostically relevant proteins, including the important early antigen OspC. The antigenic substrate in the EUROIMMUN IgG ELISA is supplemented by recombinant VlsE to bolster the antibody detection.

In the second diagnostic step, positive and borderline sera are confirmed, mostly by immunoblot. Immunoblots enable precise characterisation of the antibodies and differentiation between specific and unspecific reactions. IgG and IgM can be analysed.

A further immunoblot, the EUROLINE-WB contains a whole antigen extract supplemented with a line of recombinant VlsE and is especially useful for identifying atypical reactions.

CXCL13 is important early marker of acute neuroborreliosis. High concentrations of CXCL13 are frequently detected already at the start of the illness. CXCL13 also serves as a marker for therapy monitoring, as its concentration in the CSF sinks rapidly with successful antibiotic treatment. EUROIMMUN offers the first CE-marked ELISA for measuring CXCL13 in CSF.

In suspected cases of neuroborreliosis, intrathecal antibody synthesis can also be investigated using ELISAs and immunoblots designed for use with cerebrospinal fluid (CSF) samples. EUROIMMUN CSF assays provide high clinical sensitivity and specificity as demonstrated in samples from patients with clinically confirmed neuroborreliosis.

All EUROIMMUN Lyme tests can be fully automated, increasing the efficiency and standardisation of the diagnostics. Various ELISA, ChLIA and immunoblot processors are available catering to different throughput requirements.

EUROMicroblot microplates can be conveniently processed on ELISA instruments such as the EUROLabWorkstation ELISA or the EUROIMMUN Analyzer I or I-2P. The EUROMicroblot images are subsequently acquired using the new tabletop Microwell Imager and the results are evaluated using established EUROLineScan Software.

The new EUROMicroblot technology is particularly useful for laboratories performing high-throughput analyses, as they can be processed on the same instrument and in the same run as ELISA. The break-off wells can be separated individually, so that the number of analyses can be flexibly adapted to the actual need and the instrument capacity used optimally.