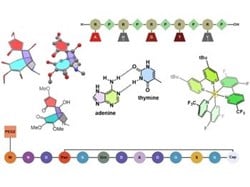 PerkinElmer has introduced the newest release of ChemDraw and ChemOffice 22.0. This release contains several key improvements and enhancements that support the drawing and representation of large molecules and new therapeutic drug delivery modalities. These new features include:

Drawing large molecules (Oligonucleotides, peptides, etc) (ChemDraw Professional) - There have been significant improvements in the representation of biopolymers.

Other new features in this release include:

Crystallographic image file support (.CIF) (ChemDraw Prime): ChemDraw now supports the “chem_comp_atom” schema in crystallographic image files (.CIF). ChemDraw will now open these files in 3D deducing bonds, bond order and hydrogen counts from the file. As all atoms will be represented explicitly, including hydrogens, there is an additional feature included to allow a user to ‘toggle off’ explicit hydrogens available in the structure menu.

Synthia Lite add-in (ChemDraw Professional): Select any molecule on your canvas and send it to Synthia™ Lite Retrosynthesis Software to plan a customized synthetic pathway according to your unique needs. While this application requires a subscription fee, there is a free trial available.

3D-Printable object improvements (.3MF) (ChemOffice): Support for copying and saving as a 3D-printable object (.3MF, for 3D-manufacturing format) has been expanded to support the extension of ring fill color to these 3D objects. Users can now copy molecules with ring fill colors and highlights as a .3MF object from ChemDraw and paste it into a PowerPoint slide to interact with and animate it in 3D. Additional export improvements have been made to make structures 3D Printable.

New hotkeys & shortcuts (ChemDraw Prime): A new atom and bond hotkey ‘g’ has introduced in this release. Using ‘g’ on a bond switches the drawing hotspot to a selected bond. Using ‘g’ over an atom switches the drawing hotspot to a selected atom. This selected bond or atom can then be moved around on the canvas simply by using the arrows on the keyboard. Pressing escape will return the selection back to a hotspot. A new shortcut, 3D rotation, has been added with this release allowing a user to rotate a 3D structure by simply pressing ‘Shift+Alt+Arrows’ on Windows and ‘Shift+Option+Arrows’ on Mac.

ChemOffice+: The recently introduced Cloud-native application gets updated on a quarterly basis, independently from ChemDraw Desktop. In its current release, it allows users to create and configure PowerPoint reports from Signals Notebook Chemistry Experiments & Collections in just a few clicks and will continue to improve on a frequent basis.