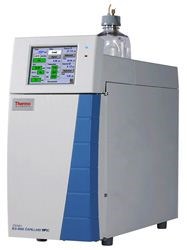 The University of Texas at Arlington and Thermo Fisher Scientific Inc., the world leader in serving science, announced that they have been granted a United States patent (#8,293,099) for a novel charge detector for ion chromatography that they developed together. The invention has been commercialized as the Thermo Scientific Dionex QD detector, which was introduced in March 2012 at the Pittcon Conference and Expo.

The detector, used in combination with the Thermo Scientific Dionex ICS-4000 ion chromatography system, is well suited for analysis of polyphosphates by environmental testing laboratories, organic acids in the food and beverage industry and amines in chemicals. It offers an easy-to-use alternative to traditional conductivity detectors for peak identification, peak purity analysis and quantification, while generally providing more information.

The charge detector was invented by UT Arlington chemistry professor Purnendu “Sandy” Dasgupta, along with Bingcheng Yang of his research group and Kannan Srinivasan, technical director for Dionex Corporation, a subsidiary of Thermo Fisher Scientific. The patent is jointly owned by Dionex and the UT System.

Dasgupta has received numerous national and international awards for his work in ion chromatography, including the prestigious 2012 Dal Nogare Award, given by the Chromatography Forum of the Delaware Valley, and the 2011 American Chemical Society Award in Chromatography. Dasgupta has been awarded more than $18 million in research grants and is the author of more than 400 scientific papers. The latest patent is his 23rd in the United States.

“We are particularly proud that this innovation has made its way into the marketplace,” said Carolyn Cason, vice president for research at UT Arlington. “One of the hallmarks of a vibrant research university is the ability to team with industry to advance scientific application, and this is what Dr. Dasgupta has done.”

“We see this as a game changer,” said Chris Pohl, Thermo Fisher vice president, chromatography chemistry. “Charge detection, when combined with suppressed conductivity detection, can be used as a confirmatory tool or as a complementary detector to provide additional analytical information.”

The Dionex QD detector uses a membrane-based technology and detects ions in proportion to their charge and concentration. This permits reliable quantification of known and unknown compounds with a single standard, as demonstrated in UT Arlington and Thermo Fisher Scientific labs.