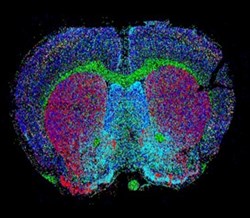 As a spin-out from Science for Life Laboratories (SciLifeLab) in Stockholm, Sweden, CARTANA has developed the only commercial technology to quantitatively map hundreds of genes with subcellular resolution and preserved tissue morphology. The new CARTANA service now provides researchers worldwide with the opportunity to see for the first time high resolution spatial gene expression maps within the cells of their brain and spinal cord tissue samples of interest.  It even enables researchers to clearly distinguish between splice variants and detect mutations directly inside the tissue samples with high specificity.

“Customers can either prepare their own samples using our unique NeuroKit and then forward them to CARTANA for in situ sequencing and data processing, or just send us their tissue slide and we will take care of the entire process of sample preparation and in situ sequencing  ” says CARTANA’s CEO Malte Kühnemund.

CARTANA's method is based on an in situ RNA sequencing technology originally developed in Mats Nilsson’s laboratory at the Science for Life Laboratory research centre in Stockholm. The technology was first described in 2013 Nature Methods publication. The resulting interest led to the decision to optimise the technology for high throughput and robustness and offer it on a commercial basis.

Barcoded padlock probes are used to target the cDNA of genes of interest, which are then amplified in situ using rolling circle amplification, followed by a DNA sequencing reaction, also directly on the tissue section. In this way cell and tissue morphology is preserved. The technology is also highly specific, identifying isoforms, splice variants, and mutations.

“The main current application of the technology is to spatially map cell types that neuroscience researchers have identified through single-cell RNA sequencing,” continues Kühnemund. As an example, researchers from SciLifeLab and University College London are using in situ sequencing technology to map single cell RNAseq-defined inhibitory neuron types in the mouse hippocampus, an area in the brain that is important for memory. This produced results that were consistent with the established knowledge that these cell types are located within this area, but they have so far never been able to map all at the same time on tissue samples.

While neuroscience is the initial main application for CARTANA’s technology, it also has a wider range of other potential applications in immunology and oncology, including studying the development of embryonic stem cells and tumour microenvironment.

Want more science news? Register as a member today and receive the latest straight to your inbox >>