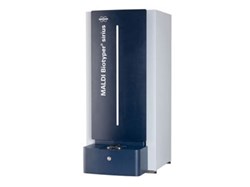 The global spreading of antibiotic resistances is a growing healthcare problem, and the development and implementation of new, fast and cost-efficient resistance tests are important for advancing antibiotic stewardship. For gram-negative bacteria, the resistance-problem is so serious in many countries that antibiotics like colistin, with the risk of nephrotoxic side effects, increasingly have to be used as an ‘antibiotic of last resort’. Antibiotic stewardship aims to de-escalate the therapy in such cases early, if possible, or switch patients to other therapeutic options, if resistance is detected.

New, fast assays to detect colistin resistance in gram-negative bacteria can now be further developed and validated on the MALDI Biotyper® sirius, in addition to all routine clinical FDA-cleared identification assays, on the same instrument. The new RUO colistin-resistance assay uses lipid analysis in negative-ion mode, and has been developed at Imperial College London, UK (Larrouy-Maumus et al., presented at ECCMID 2019, submitted for publication).

The new MALDI Biotyper® sirius uses the proprietary smartbeam™ solid-state laser with a 200 Hz repetition rate, and a lifetime of 500 million shots. This essentially makes the smartbeam a ‘lifetime laser’ in typical microbiology laboratories. The high-performance vacuum system allows for an even faster exchange of target plates in laboratory workflows, where multiple technicians prepare targets independently. Moreover, the high-performance vacuum system reduces downtime after service or preventive maintenance, which typically can be completed on the same day. The MBT sirius features new electronics, and LED strips indicate the system status. In the RUO MBT sirius, polarity switching to negative-ion mode is software-controlled and just takes a minute.

Dr. Gerald Larrouy-Maumus, Group Leader at the MRC-Centre for Molecular Bacteriology & Infection at Imperial College London, UK, commented. “The MALDI Biotyper® sirius is a versatile MALDI-TOF MS system, which is not only able to perform near-universal bacterial identification very rapidly, but with its additional negative-ion mode also has allowed us to develop a fast and robust assay to detect colistin-resistant bacteria as an important, potential future routine assay after regulatory approvals. As my students say, the new MALDI Biotyper® sirius is just ‘Wow!’”

In addition, Bruker introduced the MBT-STAR assays for Selective-Testing of Antibiotic Resistance for carbapenems and for cephalosporins as research-use-only (RUO) assays to support US research and validation studies for the fast detection of antibiotic resistance. The functional MBT-STAR assays monitor molecular mass shifts due to the enzymatic metabolization that occurs in the case of bacterial resistance against the beta-lactam class of antibiotics.

Time-to-result (TTR) for both MBT-STAR assays is only about 60 minutes after positive culture. Unlike gene-targeted molecular resistance tests, the MBT-STAR assays are functional tests that can detect not only known resistance mechanisms, but also new, emerging resistances.

Dr. Wolfgang Pusch, Executive Vice President for Microbiology & Diagnostics at Bruker Daltonics, said: “Bruker has been driving the broad implementation of near-universal, fast and cost-effective MALDI identification in microbiology for many years. We are committed to enable important new workflows, and with the MBT-STAR RUO assays, our US customers now have access to research and validation studies for fast, functional assays of important beta-lactamase resistances. We are excited that the new MALDI Biotyper® sirius is designed for further research on fast colistin-resistance testing in gram-negative bacteria, which is likely to become an important future clinical MBT assay, once it is fully validated and has regulatory approvals.”

Moreover, Bruker introduced the Micronaut™ portfolio of veterinary antibiotic susceptibility tests (AST) to the US market (not for human diagnostic use). The Micronaut products for veterinary medicine can assist in selecting targeted treatments of microbial infections in companion animals, livestock and horses. The Micronaut plates analyze true minimum inhibitory concentrations (MIC) by broth microdilution.

True MIC testing is increasingly becoming the ‘gold standard’ in veterinary testing. With the growing prevalence of resistant bacteria in veterinary medicine, the Micronaut AST plates help to guide veterinarians with the appropriate selection of antibiotic therapy. Micronaut VET Com assays support the analysis of bacteria isolated from companion animals, while Micronaut VET CSH plates can be used for bacteria isolated from live-stock animals and horses. Micronaut VET Mas enables the analysis of antibiotic resistance in bacteria that are causing bovine mastitis in the dairy industry.