EvaRuby™ Dye offers minimal cross-talk in neighboring channels and is suitable for probe-based qPCR with HRM analysis in the same reaction. 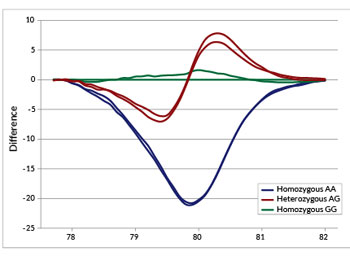 While a variety of DNA binding dyes with different fluorescence emission properties have been published for use in qPCR and HRM®, only the green fluorescent dyes SYBR® Green I, SYTO™ 9, and EvaGreen® Dye have widespread use in these applications. EvaGreen® Dye is currently the only dye suitable for qPCR and HRM® in the same reaction, however, due to its relatively broad emission, EvaGreen® cannot be combined with red PCR probes for multiplexing or HRM® in probe qPCR reactions. As a solution, Biotium scientists have developed EvaRuby™, a unique dye with a much longer Stokes shift of 480/613 nm (excitation/emission). This allows excitation of EvaRuby™ Dye by the same green/blue channel as EvaGreen® Dye, and detection in the orange (JUN™ or ROX™) channel. As a result, EvaRuby™ Dye has minimal cross-talk in standard probe detection channels and enables the combination of dye-based and probe-based qPCR in a single reaction. In addition, EvaRuby™ Dye is validated for HRM® analysis and may be used as an internal control for probe-based qPCR to detect non-specific amplification that goes undetected by target-specific probes. EvaRuby™ Dye is also suitable for singleplex qPCR, LAMP, and gel electrophoresis.

EvaRuby™ Dye has been validated on Applied Biosystems® QuantStudio™ 5 96-well and Qiagen® Rotor-Gene® Q instruments, with potential compatibility for other qPCR instruments capable of acquiring data using ~470 nm excitation and ~610 nm emission filters. EvaRuby™ Dye¬ is available as a 20X in water solution in standard 2x1 mL and 500 uL trial sizes priced at $320 and $90 respectively.

Features and benefits of EvaRuby™ Dye include: