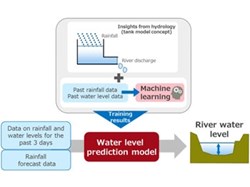 Fujitsu Limited and Fujitsu Laboratories Ltd. have announced the development of a technology that draws on mathematical models built with limited data on rainfall and water levels to create flooding predictions for rivers. The solution leverages Fujitsu Human Centric AI Zinrai, a comprehensive portfolio that encompasses Fujitsu's wide range of AI technologies and techniques, and utilizes a model that incorporates insights from hydrology to produce an AI that achieves predictions with greater precision.

The new technology proves effective even for smaller rivers with limited measurement data or for areas where water level sensors have been newly installed and have yet to accumulate sufficient data. These predictions will offer authorities a vital tool for delivering faster response times and mitigating flood damage in the event of a natural disaster, including in dispatching personnel to affected areas and supporting appropriate decision-making in issuing evacuation advisories.

Fujitsu and Fujitsu Laboratories will continue to work to further perfect this technology through a field trial with local governments across Japan with the aim of delivering a commercial solution during fiscal 2019. With the development of this solution, Fujitsu demonstrates how this and other AI technologies will play an important role in bolstering its efforts to combat the effects of climate change, and contribute to the achievement of greater sustainability in society.

In recent years, local governments across Japan have grappled with the challenges of managing rivers that cause serious flood damage in the wake of frequent, highly localized heavy rain events. Smaller rivers flowing through urban areas in particular often experience sudden water level rises due to the impact of unpredictable, yet powerful rainstorms and typhoons. Year after year, the risk of significant flood damage occurring very rapidly represents a sporadic, yet increasingly severe threat, underlining an urgent need for enhanced flooding countermeasures.

As part of these countermeasures, water level predictions have been conducted for large rivers designated as at risk of flooding. For smaller rivers or areas where water level sensors have been newly installed, however, making accurate predictions has proven difficult until now due to a lack of sufficient water level data and the latest flow rate observation results.

To address this, Fujitsu and Fujitsu Laboratories have developed a new technology that accurately predicts water levels even for rivers with limited measurement data, empowering disaster prevention personnel to take early preemptive action to mitigate damage.

About the Newly Developed Technology

Fujitsu and Fujitsu Laboratories have developed a mathematical model that can find optimal parameters when machine learning is used to train the model with past rainfall and water level data, creating functions based on the tank model concept, which expresses water discharge from a river basin within hydrology.

Using this model, the AI predicts future water levels based on data collected to present on rainfall and water level data along with forecasts for the next several hours transmitted to local governments by various meteorological organizations. The prediction model can also be optimized very quickly even following changes in the river environment or the introduction of new infrastructure. In cases like this, the model can simply be retrained using rainfall and water level data taken after any changes.

When a trial evaluating the accuracy of the new model was conducted by applying this technology to past data from smaller rivers managed by a certain local government, it was verified that when trained with data from just one rainfall water level increases could be predicted with consistent accuracy (figure 2).

In addition, Fujitsu and Fujitsu Laboratories have conducted an evaluation comparing this technology with standard water level prediction methods that use such data as flow rate observations. The evaluation, conducted with the assistance of Professor Akira Kawamura of Tokyo Metropolitan University successfully confirmed that this technology can deliver equivalent or better accuracy.

Fujitsu anticipates that this technology can also be applied to help monitor flooding in rivers outside Japan and is conducting a variety of trials with customers with the aim of making it available as a commercial solution in fiscal 2019. Fujitsu Laboratories is working to further improve the accuracy of this technology, making it part of a suite of diagnostic and predictive technologies for protecting customer assets, including facilities and social infrastructure near rivers, thereby contributing to the creation of towns and cities resistant to disasters through the use of digital technology.