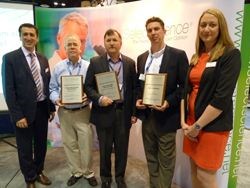 SelectScience, the fastest way to impartial, expert opinion about the best laboratory equipment and latest techniques, has awarded the winners of The 2011 Scientists’ Choice Awards for Best New Products and Best Email Campaign at Pittcon.

Exhibitors and attendees enjoyed a Champagne reception at the SelectScience booth on Tuesday afternoon, where the winners were presented with a commemorative plaque and champagne.

Over 40,000 members of SelectScience were invited to nominate their favorite new Separations and Spectroscopy products. The nominations were narrowed down to the most popular products for each category and members then voted for their winners.

The winner of the Scientists’ Choice Web Award for Most Popular Email Campaign was also honored at the presentation. This award was determined by SelectScience editors and was based on the response and click through rate of campaigns in 2011.

Kerry Parker, Editor and General Manager of SelectScience, commented: “The Scientists' Choice Awards celebrate the new laboratory products and equipment making a difference in labs each year. These awards are unique since the nominees and winners are chosen by SelectScience members online. In addition, the Web Awards provide the industry with an invaluable insight into the most effective online communication methods."

For more information about The Scientists’ Choice Awards and Web Awards visit www.scientistschoiceawards.com.