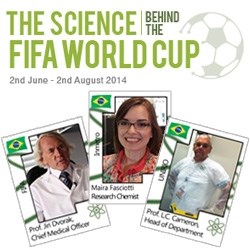 SelectScience is delighted to announce the launch of its ground-breaking Science Behind the FIFA World Cup 2014 Special Feature, which celebrates the role of science in this global sporting event.

In honor of this year’s FIFA World Cup, SelectScience traveled to Brazil to talk to leading scientists across a range of disciplines to learn how in-field and laboratory sciences are helping to protect both players and fans during the tournament, and how scientific analysis can be used to manage athlete health and improve player performance.

Over the next eight weeks, through exclusive interviews with leading scientists, you will discover how the science of Sportomics can improve player performance, and how analytical science will be used by the Brazilian Army to keep spectators safe. Plus you’ll hear from FIFA’s Chief Medical Officer and the Chief Medical Officer for the Rio 2016 Organizing Committee.

The Science Behind the World Cup 2014 Special Feature will also include the world’s first online in vivo football experiment, to discover how the Sportomics approach of applying biochemistry in the field can identify markers of athlete health, in order to improve performance real-time. You can join in – SelectScience will be asking members to share their opinion and vote for the winning team. As an added bonus, three lucky voters will win the World Cup shirt of their choice with their name on the back.

Make sure you don’t miss out – join SelectScience today to receive the weekly World Cup Newsletters.