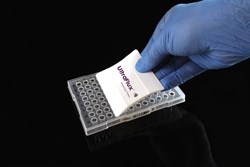 SSI, a U.S. producer of consumable plastics for laboratory researchers has launched a family of economical and easy to use products for sealing PCR plates.

The new SSI sealing products consist of film and foil solutions; providing options for everyday plate coverage through use of two foil versions, and the UltraFlux® RT is suited for optical analysis during Real Time PCR.

The UltraFlux RT is pressure released film that provides convenient non-tacky adhesion. It only sticks when pressed against the plate due to the presence of micro encapsulated beads of silicone. This film does not leave any messy residue. Users seal when they are ready, not before.

For the convenience of researchers SSI offers a bundled plate and sealing film option that combines their most popular PCR plates with the new high clarity UltraFlux RT film. A free applicator is included with each of the bundled packs. Plates are offered in unskirted, semi-skirted and full-skirted options.

Since 1990 SSI has been developing and producing innovations for life science at their California home office. They operate under an ISO9001 certified Quality Assurance process and deploy state of the art fully automated manufacturing. SSI consumable products are sold through laboratory supply distributors worldwide.