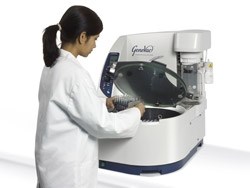 Genevac announces a proprietary “odor reduction” function for its EZ-2 evaporator which enables it to be sited on the open bench rather than taking up valuable fume hood space.

Many solvent evaporators are routinely sited inside fume extraction hoods because residual solvent vapor, remaining in the chamber at the end of a run, can expose the operator to potentially harmful odors when the system is opened.

The EZ-2’s Reduce Odor function automatically adds a repeated vent and vacuum cycle to the end of a method, which purges the evaporation chamber of residual solvent vapors. Three settings are available to optimize vapor removal without releasing trapped solvent from the cold trap.

The EZ-2 evaporator draws on the expertise of Genevac’s engineers and the experiences of many scientists in the laboratory. Using advanced evaporation science, it has been designed specifically for productive, sample-safe solvent removal, be that concentration of samples, or complete drying. Genevac’s long experience in vacuum engineering has resulted in the creation of a compact sample concentrator combining great performance, ease of use and compatibility with all commonly used solvents and acids.

Compatible with a wide range of sample holders the EZ-2 easily integrates within the workflow of any laboratory. Smart evaporator software with auto-stop provides true walk-away automation - so simple and sample safe that anyone can use it with confidence. Featuring up to 10 on board solvent specific evaporation programs the EZ-2 automatically controls vacuum and temperature to enable rapid evaporation of a wide range of solvents whilst preventing bumping and cross contamination.

As well as the reduce odor option - users may also optimize their method for specific applications such as solvent keep, and to prevent over drying when handling volatile analytes. Options are also available to enable routine, safe removal of potentially explosive solvents such as diethyl ether or pentane and removal of acids including concentrated hydrochloric acid (HCl).