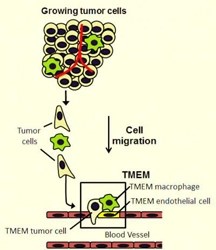 A new study has proven that a new diagnostic cancer test is more accurate in predicting the risk of breast cancer metastatic tumor spread than a test closely resembling the leading breast cancer prognostic indicator on the market.

A study led by Thomas Rohan, MD, PhD, Professor and Chair of Epidemiology and Population Health at the Albert Einstein Cancer Center of Yeshiva University and Montefiore Einstein Center for Cancer Care, has identified a new test for metastatic risk in the Journal of the National Cancer Institute (JNCI).

The new diagnostic cancer test was trialed on approximately 500 breast tumor specimens that had been collected over a 20-year period. The test was proven to be more accurate in predicting the risk of metastatic tumor spread than a test closely resembling the leading breast cancer prognostic indicator on the market. Dr Rohan indicated that such tests of metastatic risk can help doctors to identify which patients should receive aggressive therapy and which patients should be spared the treatment.

Clinical Imaging Technology
One of the authors of the study, Joan Jones, MD, senior author of the JNCI paper, Professor of Pathology of Anatomy and Structural Biology, and of Epidemiology and Population Health at Einstein, and Attending Pathologist at Montefiore Medical Center, describes the difference between their test and those currently available on the market. Current tests “assess risk for breast cancer metastasis by looking for changes in gene expression, or in levels of proteins associated with growth of tumor cells." She talks about the mechanism for tumor invasion of blood vessels and how these tests do not reflect this mechanism, adding: “By contrast, our test is based on what Einstein researchers learned from intravital imaging, which reveals biological processes deep within the tissues of a living animal. Using this technology, they determined how breast cancer tumor cells spread in rodents."

This novel technology has shown that primary breast cancers metastasize when a specific trio of cells is present together in the space called a tumor microenvironment of metastasis, or TMEM. This trio of cells and the presence of the protein Mena allows the tumor cell to spread into the bloodstream. The trio of cells has been observed in living rodents using a triple antibody-based immunostain with clinical imaging technology in Einstein's Integrated Imaging Program (IIP).

Breast Cancer Patient Study
The JNCI paper describes results from a blind case-control study that evaluated tumor samples from a subset of women with diagnosed invasive ductal carcinoma of the breast. TMEM testing was carried out on specimens from women who later developed a distant metastasis (the cases) and on specimens from women who were alive and had not developed a distant metastasis (the controls). Controls were individually matched with cases so that women in each pair were the same age and were diagnosed with breast cancer in the same year. The pathology team applied the triple immunostain to specimens and counted the TMEMs using clinical imaging technology.

The TMEM test performed well at assessing metastatic risk for the study's most populous cancer subgroup: women with estrogen receptor positive/HER2- disease (i.e., their cancer cells possess estrogen receptors but lack HER2 protein). For comparison, all tumor specimens included in the study were also analyzed by the previously validated IHC4 test, which measures levels of protein in breast-tumor tissue.

Findings and Outcome
The study findings showed there was little agreement between the TMEM test and the IHC4 test regarding prediction of metastatic risk. TMEM results were highly statistically significant, while IHC4 scores were borderline significant at best.

With further validation and clinical studies, the findings suggest that the TMEM diagnostic assay test could be used to reduce the incidence of overtreatment in early stage breast cancer, and help to guide physicians with treatment decisions in women with breast cancer.