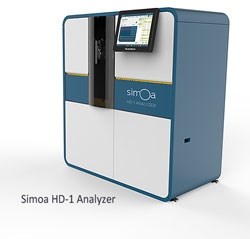 Quanterix Corporation, a leader in high definition diagnostics, delivering ultrasensitive single molecule measurement for the benefit of human health, today announced that JAMA Neurology has published a ground-breaking study in which its Simoa (single molecule array) technology was used to directly measure the brain protein Tau in the blood of athletes who had sustained mild traumatic brain injuries/ concussions. These measurements have never before been possible in blood.

In this paper, levels of plasma Tau, implicated in neurodegeneration, were studied in connection with sports-related head injuries. Post-concussion Tau levels were followed over approximately six days and were compared with Tau levels measured in a group of hockey players prior to the start of the hockey season. The results indicate that Tau is significantly elevated following mild to severe concussion and remains elevated compared to pre-season levels for up to 6 days post-concussion. This study could be the first step in establishing a Tau blood test as a useful tool for determining fitness for return to play after a concussion and in helping physicians make more accurate diagnoses of brain injuries. It could also be used to better predict long-term prognosis of individuals having undergone acute and repetitive injuries. In an editorial published in the journal, Drs. Diaz-Arrastia and Gatson describe the study as “an important contribution to this field and introduces an innovative technology that may have wide applicability.”

Traumatic brain injury, particularly mild traumatic brain injury, is a common occurrence in athletes performing contact sports and in military personnel deployed in combat. Currently, neuronal proteins like tau require cerebrospinal fluid (CSF) collection as their concentrations in peripheral circulation are below the detection limit of conventional tests. CSF collection is an invasive, expensive and time-consuming procedure requiring that a spinal tap be performed on the patient. With Simoa, the need for such testing is eliminated as Simoa delivers a 3000-fold improvement in sensitivity compared to standard tests available today. Quanterix’s Simoa platform offers the ability to measure low-abundance biomarkers of brain function such as Tau in a simple blood test, providing new insights for diagnosis, monitoring, and treatment of several neurological and neurodegenerative conditions.

“This study demonstrates a great ability to further the understanding of the long term effects of TBI,” said Paul Chapman, CEO of Quanterix. “One of the most promising applications for our Simoa platform is to provide a simple blood test that could speed the diagnosis of a concussion in a clinical setting and on the sidelines in a sports arena, therefore, improving overall treatment.”