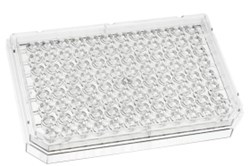 InSphero AG, working with researchers at the Medical University Innsbruck (Tyrol, Austria), has published a study highlighting development of a novel 3D cell culture model for non-small cell lung cancer (NSCLC), one of the leading causes of cancer deaths in men and women worldwide. The findings, published March 24 in PLOS One, used InSphero’s GravityPLUS™ hanging drop platform to form 3D tumor spheroid co-cultures comprised of a NSCLC tumor cell line and lung-derived fibroblasts. The results showed how both lung cancer cells and stromal cells (lung fibroblasts) behave differently when grown together in 3D than when grown alone.

The study was initiated in response to the recent failure of several targeted therapies for NSCLC in clinical trials, therapies which were supported by promising in vitro data. To achieve a better in vitro model, researchers used the NSCLC cell lines A549 or Colo699 to create 3D tumors in hanging drops, with or without the lung fibroblast cell line SV80. The tumors were then analyzed for viability, morpology, and expression of different phenotypic markers using immunohistochemistry (IHC) and other methods. Most notable were changes in the tumor cells during co-culture that indicated an epithelial to mesenchymal transition (EMT), as evidenced by an increase in vimentin protein expression, and a decrease in the epithelial cell adhesion protein E-cadherin. Also of interest was the expression of alpha smooth muscle actin (α-SMA), a marker of cancer-associated fibroblasts, in the SV80 fibroblasts only when co-cultured with A549 cells.

Dr. Jens Kelm, Chief Scientific Officer and co-founder of InSphero AG was co-author on the manuscript. He states the 3D co-culture model should improve drug efficacy testing by removing some of the bias inherent in current 2D in vitro models used to screen anti-cancer drugs. “What this 3D lung cancer co-culture model confirmed for us is that tumor cells are phenotypically different in terms of their viability, activity, and morphology when they grow in the presence of fibroblasts. Likewise, the stromal cells associated with tumors also behave differently in co-culture than they do alone, becoming more like myofibroblasts, cells that are known to assist tumor growth, invasion, and metastasis. This model creates an even more native in vitro tumor environment to more easily assess tumor growth, pathobiology, and drug efficacy.”

InSphero CEO and co-founder Dr. Jan Lichtenberg sees the agreement as an exciting next step toward making InSphero a total solution provider for the 3D cell culture marketplace. "Adding the Cell3iMager to our portfolio gets us closer to offering our customers a complete set of solutions for 3D cell based assays – from the assay-ready 3D cell model, to assay reagents and instruments for endpoint analysis."

Mr. Kunihisa Hashimoto, General Manager of Dainippon Screen's Imaging and Solutions Division, noted the agreement with InSphero is also a major step for Dainippon Screen. "Combining InSphero's GravityTRAP™ plates and microtissues with the imaging technology of our Cell3iMager is sure to streamline and simplify research using 3D tissue cultures. We are excited to leverage InSphero's expertise in the 3D marketplace to help bring our innovative imaging system to North America and Europe."