Product News: Fully Automate Sample Preparation for the Testing of Vitamin D and Immunosuppressants with the New Hamilton MassSTAR 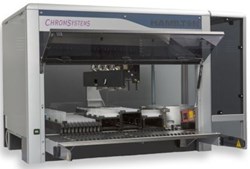 The ready-to-use CE-IVD solution consists of MassSTAR which automates the sample preparation procedure and two Chromsystems’ CE-IVD certified kits, the MassChrom® 25-OH-Vitamin D3/D2 for Vitamin D profiling and the MassTox® Immunosuppressants for Therapeutic Drug Monitoring of Cyclosporine A, Tacrolimus, Sirolimus and Everolimus. The jointly developed MassSTAR enables laboratories to fully automate sample preparation for the testing of Vitamin D from serum and plasma as well as of Immunosuppressants from whole blood.

MassSTAR is based on the Microlab STAR line of instruments and was co-developed by Chromsystems and Hamilton as a ready to use and fully CE-IVD compliant workflow solution. The dedicated Graphical User Interface (GUI) and dialogues make it easy to use. Input worklists can be generated for all commonly used LC-MS/MS systems such as AB Sciex, Agilent, Shimadzu, Thermo and Waters. Special attention was paid to ensure full traceability of all samples and actions. During loading, barcodes of all samples and plates are read and traced. All actions on the instrument, such as pipetting and transport actions, are monitored as well. Hamilton’s Total Aspiration and Dispense Monitoring (TADM) technology is employed to tightly monitor pipetting of whole blood and exclude faulty samples.