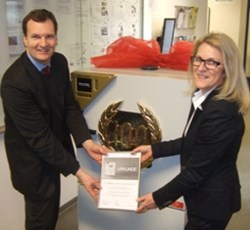 BINDER GmbH, the world's largest specialist in simulation chambers for scientific and industrial laboratories this year delivered the 100th temperature chamber to the Institute for Power Electronics and Electrical Drives (ISEA) in Aachen.

In the course of a ceremonial commissioning on March 11, 2014, the 100th environmental simulation chamber was presented to Prof. Dr. rer. nat. Dirk Uwe Sauer, a chair holder at ISEA. Instead of the red triangle typical for BINDER, the temperature chamber was adorned with a gold triangle and a red bow. As she presented the official certificate, Jutta Ehinger, Sales Director at BINDER GmbH, emphasized how infrequently one encounters such a mature customer relationship in these fast-paced times. Professor Sauer also confirmed his satisfaction: "Thanks to the absolute reliability of these devices, we are able to achieve reproducible, valid results in our research. The failure rate over the past ten years has been less than one percent, and we have never experienced a complete failure."

ISEA is the first customer in the world to use so many temperature chambers. Various types of batteries are subjected to cyclical temperature tests in ranges from -20 °C to 70 °C in the Series MK environmental simulations chambers. The goal is to support system developers and battery manufacturers so that the batteries fulfill their purpose as unobtrusively, efficiently and economically as possible. The main area of application is research with lithium batteries. But lead batteries are also subjected to extreme endurance tests in the temperature chambers. For this reason the temperature chambers have been specially modified to accommodate the greater weights. For more than 40 years, ISEA has been conducting research in the fields of power electronics, electronic devices, electronic drives and electrochemical energy storage systems. It operates the largest university work group focusing exclusively on battery system technology in Germany.