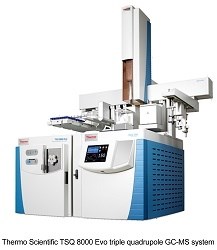 European laboratories testing feed and food for dioxins and dioxin-like substances now have lower-cost, smaller-footprint alternatives to high-resolution mass spectrometers (HRMS) for confirming levels of the toxic contaminants, thanks to a new European Union regulation.

Thermo Fisher Scientific worked closely with national reference labs (NRLs) in the European Union to support the development of the new regulation, known as Commission Regulation (EU) No. 709/2014, which permits use of gas chromatograph-triple stage quadrupole mass spectrometers (GC-MS/MS) for confirmation.

EU regulations previously permitted the use of GC-MS/MS only to screen samples for dioxins, a group of persistent organic chemicals that can cause reproductive and developmental problems, damage the immune system, interfere with hormones and also cause cancer. Benchtop GC-MS/MS instruments are widely used throughout the analytical community, compared to floor-standing GC-HRMS systems, which are used for more specialized applications.

“For laboratories that still require the highest levels of performance, we offer an excellent GC-HRMS instrument,” said Paul Silcock, marketing manager, GC-MS for Thermo Fisher Scientific. “We’re now positioned to also offer a top GC-MS/MS platform for confirmatory dioxin analysis which has been recently validated against the new regulatory criteria.”

Thermo Fisher also worked with the UK National Reference Laboratory for Contaminants in Food and Feed at the Food and Environmental Research Agency to evaluate GC-MS/MS for confirmation of dioxins.

“Thermo Fisher has helped us to evaluate the suitability of using GC-MS/MS for official food and feed control of dioxins,” said Dr. Martin Rose of the UK NRL. “We wanted to establish whether or not this technique was at a stage where it could meet the highly demanding analytical criteria for dioxin analysis, which previously allowed only HRMS to be used as a confirmatory technique.”