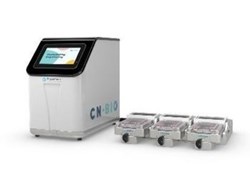 CN Bio, a leading organ-on-a-chip company (OOC) that designs and manufactures single-and multi-organ microphysiological systems (MPS), has announced that it has expanded its collaboration with the U.S. Food and Drug Administration (FDA) for the second time, with new research aiming to evaluate multi-organ MPS and their applications using the PhysioMimix™ multi-organ System. Building on the success of previous studies, the system will initially be investigated for improving the preclinical estimation of human drug bioavailability compared to standard animal models.

For orally administered drugs, a critical parameter that needs to be understood by drug developers and regulatory agencies is bioavailability. Bioavailability is defined as the fraction of drug reaching the bloodstream. Accurately predicting the bioavailability of orally administered medicines in humans during preclinical development is crucial, as it forms the basis for setting safe and efficacious doses in the clinic. Animal models currently dominate when estimating bioavailability, but evidence has shown that these models are poor predictors in part due to inherent physiological and metabolic differences. Paving the way for approaches such as MPS, the recently passed FDA Modernization Act 2.0 has removed the mandatory requirement for animal testing for toxicity where enhanced performance is proven using in vitro alternatives.

CN Bio’s PhysioMimix Gut/Liver model recapitulates in vitro the structure and function of these human tissues and their fluidic interaction, for comparing intravenous and oral compound dosing. This model uniquely recreates the combined effect of intestinal permeability and first-pass metabolism by the liver for the prediction of human oral bioavailability.

During the past five years of collaboration with CN Bio, the FDA has utilized the PhysioMimix liver model for drug toxicity and metabolism studies resulting in the first co-publication, peer-reviewed article between an MPS provider and a regulator. Within the same year, the FDA and CN Bio broadened their partnership further to explore the potential of the company’s lung model across various inhaled drug applications – work on this is still ongoing.

Want the latest science news straight to your inbox? Become a SelectScience member for free today >>