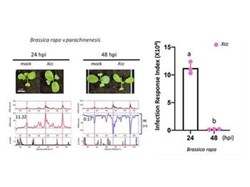 Researchers from the Disruptive and Sustainable Technologies for Agricultural Precision (DiSTAP) Interdisciplinary Research Group (IRG) of Singapore-MIT Alliance for Research and Technology (SMART), MIT’s research enterprise in Singapore, and their local collaborators from Temasek Life Sciences Laboratory (TLL), have developed a rapid Raman spectroscopy-based method for detecting and quantifying early bacterial infection in crops. The Raman spectral biomarkers and diagnostic algorithm enable the noninvasive and early diagnosis of bacterial infections in crop plants, which can be critical for the progress of plant disease management and agricultural productivity.

Due to the increasing demand for global food supply and security, there is a growing need to improve agricultural production systems and increase crop productivity. Globally, bacterial pathogen infection in crop plants is one of the major contributors to agricultural yield losses. Climate change also adds to the problem by accelerating the spread of plant diseases. Hence, developing methods for rapid and early detection of pathogen-infected crops is important to improve plant disease management and reduce crop loss.

The breakthrough by SMART and TLL researchers offers a faster and more accurate method to detect bacterial infection in crop plants at an earlier stage, as compared to existing techniques. The new results appear in a paper titled “Rapid detection and quantification of plant innate immunity response using Raman spectroscopy” published in the journal Frontiers in Plant Science.

“The early detection of pathogen-infected crop plants is a significant step to improve plant disease management,” says Chua Nam Hai, DiSTAP co-lead principal investigator, professor, TLL deputy chair, and co-corresponding author. “It will allow the fast and selective removal of pathogen load and curb the further spread of disease to other neighboring crops.”

Traditionally, plant disease diagnosis involves a simple visual inspection of plants for disease symptoms and severity. “Visual inspection methods are often ineffective, as disease symptoms usually manifest only at relatively later stages of infection, when the pathogen load is already high and reparative measures are limited. Hence, new methods are required for rapid and early detection of bacterial infection. The idea would be akin to having medical tests to identify human diseases at an early stage, instead of waiting for visual symptoms to show, so that early intervention or treatment can be applied,” says MIT Professor Rajeev Ram, who is a DiSTAP principal investigator and co-corresponding author on the paper.

While existing techniques, such as current molecular detection methods, can detect bacterial infection in plants, they are often limited in their use. Molecular detection methods largely depend on the availability of pathogen-specific gene sequences or antibodies to identify bacterial infection in crops; the implementation is also time-consuming and nonadaptable for on-site field application due to the high cost and bulky equipment required, making it impractical for use in agricultural farms.

“At DiSTAP, we have developed a quantitative Raman spectroscopy-based algorithm that can help farmers to identify bacterial infection rapidly. The developed diagnostic algorithm makes use of Raman spectral biomarkers and can be easily implemented in cloud-based computing and prediction platforms. It is more effective than existing techniques as it enables accurate identification and early detection of bacterial infection, both of which are crucial to saving crop plants that would otherwise be destroyed,” explains Gajendra Pratap Singh, scientific director and principal investigator at DiSTAP and co-lead author.

A portable Raman system can be used on farms and provides farmers with an accurate and simple yes-or-no response when used to test for the presence of bacterial infections in crops. The development of this rapid and noninvasive method could improve plant disease management and have a transformative impact on agricultural farms by efficiently reducing agricultural yield loss and increasing productivity.

“Using the diagnostic algorithm method, we experimented on several edible plants such as choy sum,” says DiSTAP and TLL principal investigator and co-corresponding author Rajani Sarojam. “The results showed that the Raman spectroscopy-based method can swiftly detect and quantify innate immunity response in plants infected with bacterial pathogens. We believe that this technology will be beneficial for agricultural farms to increase their productivity by reducing their yield loss due to plant diseases.”

The researchers are currently working on the development of high-throughput, custom-made portable or hand-held Raman spectrometers that will allow Raman spectral analysis to be quickly and easily performed on field-grown crops.

SMART and TLL developed and discovered the diagnostic algorithm and Raman spectral biomarkers. TLL also confirmed and validated the detection method through mutant plants. The research is carried out by SMART and supported by the National Research Foundation of Singapore under its Campus for Research Excellence And Technological Enterprise (CREATE) program.

SMART was established by MIT and the NRF in 2007. The first entity in CREATE developed by NRF, SMART serves as an intellectual and innovation hub for research interactions between MIT and Singapore, undertaking cutting-edge research projects in areas of interest to both Singapore and MIT. SMART currently comprises an Innovation Center and five IRGs: Antimicrobial Resistance, Critical Analytics for Manufacturing Personalized-Medicine, DiSTAP, Future Urban Mobility, and Low Energy Electronic Systems. SMART research is funded by the NRF under the CREATE program.

Led by Professor Michael Strano of MIT and Professor Chua Nam Hai of Temasek Lifesciences Laboratory, the DiSTAP program addresses deep problems in food production in Singapore and the world by developing a suite of impactful and novel analytical, genetic, and biomaterial technologies. The goal is to fundamentally change how plant biosynthetic pathways are discovered, monitored, engineered, and ultimately translated to meet the global demand for food and nutrients. Scientists from MIT, TTL, Nanyang Technological University, and National University of Singapore are collaboratively developing new tools for the continuous measurement of important plant metabolites and hormones for novel discovery, deeper understanding and control of plant biosynthetic pathways in ways not yet possible, especially in the context of green leafy vegetables; leveraging these new techniques to engineer plants with highly desirable properties for global food security, including high-yield density production, and drought and pathogen resistance; and applying these technologies to improve urban farming.