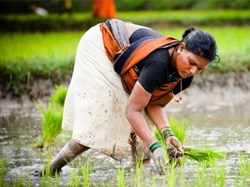 A team of scientists is growing a type of rice from India that had become extinct with the spread of higher-yielding types, as part of a project to revive recipes and flavors that have been lost.

Drawing on oral histories and historic cookbooks, they have identified once-loved rice varieties that are no longer grown. One heritage crop is already flourishing on a farm outside of Rampur in preparation for its first harvest. Another crop will soon be grown in a controlled environment, or 'virtual rice paddy', so scientists can assess the effect of modern pathogens on the revived plants. The scientists incorporate the extinct flavors and characteristics into plants that will survive and thrive in an increasingly extreme climate, while also delivering the high yields and nutrients required by an ever-expanding population.

Alongside a monthly column in the Indian press, the project will also produce a collection of historic recipes from archival sources available to contemporary cooks and an anthology of creative writing on South Asian food and cultural practices. Desi Delicacies: Food Writing from Muslim South Asia will be released by Picador in January 2021, and includes essays, short stories and recipes. There will also be a series of documentaries filmed highlighting culinary memories through traditions of spoken word and oral history.

Forgotten Food will culminate with the Rampur Food Festival in October, 2022 - a two-day event hosted by the Rampur Raza Library, where the once-extinct varieties of rice will be cooked to recipes in Urdu and Persian manuscripts from the royal court of the Rampur Nawabs.

In the late nineteenth century, the Rampur court was known for its patronage of an important cultural festival, the Jashn-e-Benazir, featuring poetry, music and food. The event brought different social classes and communities together in the shared space of bazaar culture.

The Rampur Food Festival will build on this model, bringing heritage food to street stalls to highlight its popularity and affordability, and support the livelihoods of local cooks, street vendors and artisans. The festival will also showcase other partnership outputs, including performances of dastangoi – traditional story-telling – a historic recipe collection making material from archival sources available to contemporary cooks and documentaries highlighting culinary memory through oral history.

“This project is about reviving and sharing the historic recipes at the core of Muslim culinary heritage in India and helping to tackle hunger with the foods local people want to eat. By introducing younger generations to the rice varieties and flavors enjoyed by their ancestors, we hope to invigorate local economies in Rampur, creating new opportunities for street vendors and encouraging tourism. Food also has tremendous power to bring people together, so by supporting communities to restore their shared heritage, this project has the potential to bring different groups together to counter tension and violence," says Professor Siobhan Lambert-Hurley, Professor of Global History at the University of Sheffield.