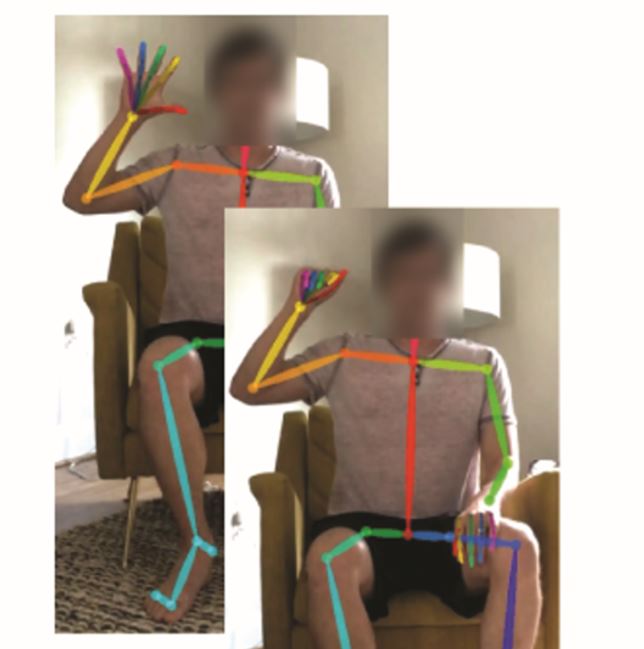 The pose estimation software used in the study successfully captured the subjects’ movements, including the opening and closing of hands. © Dr. Ryan Roemmich

New pose estimation software has the potential to help neurologists and their patients capture important clinical data using simple tools such as smartphones and tablets, according to a study by Johns Hopkins Medicine, the Kennedy Krieger Institute, and the University of Maryland. A human pose estimation is a form of artificial intelligence that automatically detects and labels specific landmarks on the human body, such as elbows and fingers, from simple images or videos.

To measure the speed, rhythm, and range of a patient’s motor function, neurologists will often have the patient perform certain repetitive movements, such as tapping fingers or opening and closing hands. An objective assessment of these tests provides the most accurate insight into the severity of a patient’s condition, thus better-informing treatment decisions. However, objective motion capture devices are often expensive or only have the ability to measure one type of movement. Therefore, most neurologists must make subjective assessments of their patients’ motor function, usually by simply watching patients as they carry out different tasks.

“Our goal was to develop a fast, inexpensive and easily accessible method to objectively measure a patient’s movements across multiple extremities,” says study lead author Ryan Roemmich, Ph.D., an assistant professor in the Department of Physical Medicine and Rehabilitation at the Johns Hopkins University School of Medicine and a human movement scientist at the Kennedy Krieger Institute.

The research team had 10 healthy subjects between the ages of 24 and 33 record smartphone videos of themselves performing five tasks often assigned to neurology patients during motor function assessments: finger taps, hand closures, toe taps, heel taps, and hand rotations. The subjects performed each task at four different speeds. Their movements were tracked using a freely available human pose estimation algorithm, then fed into the team’s software for evaluation.

The results showed that across all five tasks, the software accurately detected more than 96% of the movements detected by the manual inspection method. These results held up across several variables, including location, type of smartphone used, and method of recording: Some subjects placed their smartphone on a stable surface and hit “record,” while others had a family member or friend hold the device.

With encouraging results from their sample of young, healthy people, the research team’s next step is to test the software on people who require neurological care. Currently, the team is collecting a large sample of videos of people with Parkinson’s disease doing the same five motor function tasks that the healthy subjects performed.

“We want anyone with a smartphone or tablet to be able to record video that can be successfully analyzed by their physician,” says Roemmich. “With further development of this pose estimation software, motor assessments could eventually be performed and analyzed without the patient having to leave their home.”