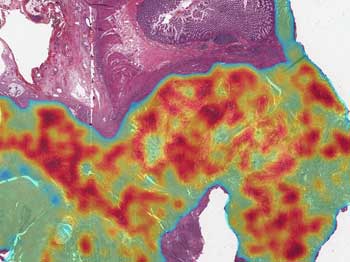 Spatial map of a colorectal cancer tissue section produced by the IDARS algorithm, mapping a proxy measure of instability (red) or stability (green) for DNA microsatellites in the tumor. Credit: University of Warwick

A new deep learning algorithm created by researchers from the University of Warwick can pick up the molecular pathways and development of key mutations causing colorectal cancer more accurately than existing methods, meaning patients could benefit from targeted therapies with quicker turnaround times and at a lower cost.

In order to quickly and efficiently treat colorectal cancer the status of molecular pathways involved in the development and key mutations of the cancer must be determined. Current methods to do so involve costly genetic tests, which can be a slow process.

However, researchers from the Department of Computer Science at the University of Warwick have been exploring how machine learning can be used to predict the status of three main colorectal cancer molecular pathways and hyper-mutated tumors. A key feature of the method is that it does not require any manual annotations on digitized images of the cancerous tissue slides.

In the paper, ‘A weakly supervised deep learning framework to predict the status of molecular pathways and key mutations in colorectal cancer from routine histology images’, published on the 19th of October, in the journal The Lancet Digital Health, researchers from the University of Warwick have explored how machine learning can detect three key mutations from whole-slide images of Colorectal cancer slides stained with Hematoxylin and Eosin, as an alternate to current testing regimes for these pathways and mutations.

The researchers propose a novel iterative draw-and-rank sampling algorithm, which can select representative sub-images or tiles from a whole-slide image without needing any detailed annotations at cell or regional levels by a pathologist. Essentially the new algorithm can leverage the power of raw pixel data for predicting clinically important mutations and pathways for colon cancer, without human interception.

Iterative draw-and-rank sampling works by training a deep convolutional neural network to identify image regions most predictive of key molecular parameters in colorectal cancers. A key feature of iterative draw-and-rank sampling is that it enables a systematic and data-driven analysis of the cellular composition of image tiles strongly predictive of colorectal molecular pathways.

The accuracy of iterative draw-and-rank sampling has also been analyzed by researchers, who found that for the prediction of the three main colorectal cancer molecular pathways and key mutations their algorithm proved to be significantly more accurate than current published methods.

This means the new algorithm can potentially be used to stratify patients for targeted therapies, at lower costs and quicker turnaround times, as compared to sequencing or special stain-based approaches after large-scale validation.

Dr Mohsin Bilal, first author of the study and a data scientist in the Tissue Image Analytics (TIA) Centre at the University of Warwick, says: “I am very excited about the possibility of iterative draw-and-rank sampling algorithm use to detect molecular pathways and key mutations in colorectal cancer and select patients likely to benefit from targeted therapies at lower cost with quicker turnaround times. We are also looking forward to the vital next step of validating our algorithm on large multi-centric cohorts.”

Professor Nasir Rajpoot, Director of the TIA Centre at Warwick and senior author of the study, comments: “This study demonstrates how smart algorithms can leverage the power of raw pixel data for predicting clinically important mutations and pathways for colon cancer. A major advantage of our iterative draw-and-rank sampling algorithm is that it does not require time-consuming and laborious annotations from expert pathologists.
“These findings open up the possibility of the potential use of iterative draw-and-rank sampling to select patients likely to benefit from targeted therapies and do that at lower costs and with quicker turnaround times as compared to sequencing or special marker-based approaches.

“We will now be looking to conduct a large multi-centric validation of this algorithm to pave the way for its clinical adoption.”