Bubble buildup can hinder many industrial processes, but a new method can reduce or even eliminate it 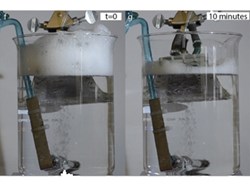 In many industrial processes, such as in bioreactors that produce fuels or pharmaceuticals, foam can get in the way. Frothy bubbles can take up a lot of space, limiting the volume available for making the product and sometimes gumming up pipes and valves or damaging living cells. Companies spend an estimated $3 billion a year on chemical additives called defoamers, but these can affect the purity of the product and may require extra processing steps for their removal.

Researchers at Massachusetts Institute of Technology (MIT) have come up with a simple, inexpensive, and completely passive system for reducing or eliminating the foam buildup, using bubble-attracting sheets of specially textured mesh that make bubbles collapse as fast as they form. The new process is described in the journal Advanced Materials Interfaces, in a paper by recent graduate Leonid Rapoport, visiting student Theo Emmerich, and professor of mechanical engineering Kripa Varanasi.

The new system uses surfaces the researchers call “aerophilic,” which attract and shed bubbles of air or gas in much the same way that hydrophilic surfaces cause droplets of water to cling to a surface, spread out, and fall away.

Varanasi explains, “Foams are everywhere in industrial processes, including beer brewing, paper making, oil and gas production and processing, biofuel generation, shampoo and cosmetics production, and chemical processing. It’s one of the main challenges in cell culture or in bioreactors. To promote cell growth, various gases are typically diffused through the water or other liquid medium. But this can lead to a build-up of foam, and as the tiny bubbles burst, they can produce shear forces that can damage or kill the cells, so controlling the foam is essential. The usual way of dealing with the foam problem is by adding chemicals such as glycols or alcohols, which typically then need to be filtered out again. But that adds cost and extra processing steps and can affect the chemistry of the product. So, the team asked, how can you get rid of foams without having to add chemicals? That was our challenge.”

To tackle the problem, they created high-speed video in order to study how bubbles react when they strike a surface. They found that the bubbles tend to bounce away like a rubber ball, bouncing several times before eventually sticking in place, just as droplets of liquid do when they hit a surface, only upside down. The bubbles are rising, so they bounce downward.

Rapoport says, “In order to effectively capture the impacting bubble, we had to understand how the liquid film separating it from the surface drains, and we had to start at square one because there wasn’t even an established metric to measure how good a surface is at capturing impacting bubbles. Ultimately, we were able to understand the physics behind what causes a bubble to bounce away, and that understanding drove the design process.”

The team came up with a flat device that has a set of carefully designed surface textures at a variety of size scales. The surface was tuned so that bubbles would adhere right away without bouncing, and quickly spread out and dissipate to make way for the next bubble instead of accumulating as foam.

Emmerich says, “The key to quickly capturing bubbles and controlling foam turned out to be a three-layered system with features of progressively finer sizes. These features help to trap a very thin layer of air along the surface of a material. This surface, known as a plastron, has similarities to the texture of some feathers on diving birds that help keep the animals dry underwater. In this case, the plastron helps to make the bubbles stick to the surface and dissipate. The net effect is to reduce the time it takes for a bubble to stick to the surface by a hundredfold. In tests, the bouncing time was reduced from hundreds of milliseconds to just a few milliseconds."

To test the idea in the lab, the team built a device containing a bubble-capturing surface and inserted it into a beaker that had bubbles rising through it. They placed that beaker next to an identical one containing foaming suds with a sheet of the same size, but without the textured material. In the beaker with the bubble-capturing surface, the foam quickly dissipated down to almost nothing, while a full layer of foam stayed in place in the other beaker.

Such bubble-capturing surfaces could easily be retrofitted to many industrial processing facilities that currently rely on defoaming chemicals. Varanasi speculated that in the longer run, such a method might even be used to capture methane seeping from melting permafrost as the world warms. This could both prevent some of that potent greenhouse gas from making it into the atmosphere, and at the same time provide a source of fuel. At this point that possibility is “pie in the sky,” he says, but in principle it could work. Unlike many new technology developments, this system is simple enough that it could be readily implemented.