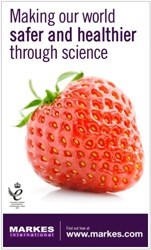 Markes International, in association with Exterion Media (UK) Ltd, is launching a major digital poster campaign to highlight the value of the analytical chemistry industry to society.

Delivered via digital posters on railway platforms in the UK between London Paddington and Swansea, the campaign will run for 10 days from 29 June, and is part of a drive by Markes to explain to the wider public how its field of science brings substantial benefits to public safety and health.

Markes’ Marketing Manager, Dr Gavin Davies, explains the concept in more detail: “Basically, very few people outside of our highly technical sphere really appreciate the positive role that chemical analysis plays in the world today. Our aim with this campaign is to try to ‘join-the dots’ between what we do in our business and where it fits in the real world.” Dr Davies went on to say: “We’re doing this by dispensing with the usual scientific jargon, and instead conveying the importance of what we’re doing by creating awareness with these digital posters, and through the medium of a plain-English e-book”.

It is believed that this is the first time a laboratory instrument company, such as Markes, has embarked on such an out-of-house campaign, and the opportunity arose as a result of Markes winning “best of best” at the recent Chartered Institute of Marketing’s Canmol: Wales Marketing Awards – a prize sponsored by Exterion Media (UK) Ltd.

Paul Cranwell, Business Director at Exterion Media, said: “Markes International, as a highly technical B2B company, was a worthy prize winner at the Canmol awards and an interesting opportunity for us to bring this company and their science to a wider audience”. He added: “We were delighted to award Markes with this prize, and are even more delighted to be working with them on this ground-breaking campaign.”

The campaign features a rolling set of digital poster displays, prominently displayed at all the major railway stations between London Paddington and Swansea. Images of a strawberry, paint and a child’s dummy are used to grab the attention and direct readers to the company’s webpage, where a downloadable easy-to-understand e-book explains the positive role that analytical science – and Markes’ instrumentation in particular – plays in the world.

Dr Davies said: “Our concept with using a digital campaign on railway platforms is to encourage those who travel by train to think about the role of chemistry in our lives, and of course to raise awareness of Markes as a company, from London right across to south Wales where we're based. We’re really looking forward to seeing this campaign come to fruition, and to developing this whole concept further in the future.”