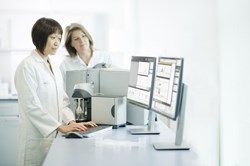 The new systems will be shown alongside the Mastersizer 3000 laser diffraction particle size analyzer, complete with its recently introduced HydroSight imaging and Hydro SV small volume liquid dispersion accessories. Visitors can also explore nanoparticle characterization with the Zetasizer Nano and NanoSight Nanoparticle Tracking Analysis (NTA) systems, and morphological and chemical characterization with the Morphologi G3-ID, also the subject of a conference presentation.

2015 is the International Year of Light and Light Technologies, a celebration that resonates particularly with Malvern as pioneers of the light scattering and related technologies that are fundamental to the majority of its analytical instruments. So as well as exhibiting at Pittcon, Malvern is providing an educational focus with the contribution of five short courses, covering topics that include particle and nanoparticle size analysis, gel permeation/size exclusion chromatography, optical rheology and zeta potential measurement. In addition, work using Malvern’s Morphologi G3-ID particle characterization system will be described in ‘Forensic Analyses by Morphologically Directed Raman Spectroscopy’, a presentation from researchers at the University of New Haven, which forms part of the conference session ‘Techniques in Forensic Analysis’.