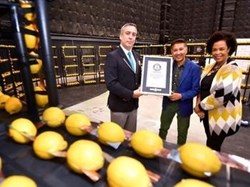 A new Guinness World Records® title for the highest voltage from a fruit battery has been set by the Royal Society of Chemistry (RSC), University of Bath battery expert Professor Saiful Islam and science presenter Fran Scott.

The RSC team used 2,923 lemons to generate an astonishing 2,307.8 volts, which smashed the previous world record of 1,521 volts, and subsequently launching a battery-powered go-kart race run by the Blair Project in Manchester. The supercharged feat was designed by the Royal Society of Chemistry to highlight the importance of energy storage and the need for new innovations for a zero-carbon world against the backdrop of the COP26 Climate Change Summit.

Alongside the record title, the RSC has undertaken research to understand awareness and attitudes around sustainability and climate change amongst young people, to provide critical insight into the teaching of sustainability-related topics in schools.

Together with existing teacher research, the organisation says the findings will inform recommendations to the UK Government about its future education policy and curriculum improvements.

Dr Helen Pain, Royal Society of Chemistry CEO, said: “Public concern around climate change is at record levels. Succeeding in our Guinness World Records attempt to squeeze the highest voltage from a fruit battery has been tremendous fun, but the sustainability message underpinning it is incredibly serious and important”.

Professor Saiful Islam, a trustee of the Royal Society of Chemistry, professor of materials chemistry at the University of Bath and member of the Energy Materials Research Group said: “Although this is officially a world record-breaking fruit battery, it’s still not particularly effective – the wattage is smaller than the amount of electrical power needed to turn on a smart television.

“While our current battery technology is very good, the truth is battery technology still needs significant improvement to help us get to the net zero carbon world we are striving to reach. While we can generate electricity from renewable sources, we need to find better ways to store this energy so we don’t have to use it or waste it straight away. If we are serious about reaching net zero carbon status, we absolutely must improve energy storage technology, and that’s what this incredibly large lemon battery is showing us. Lastly, we have to be able to recycle and reuse these batteries effectively to enable a truly sustainable energy future.”

The Guinness World Records® title was set as part of the RSC’s ongoing commitment to promoting chemistry and acting as a catalyst for change, together with its focus on driving increased awareness and education on sustainability and the impact of climate change.

Royal Society of Chemistry CEO, Dr Helen Pain, added: “Sustainability and climate change must become a key priority for the curriculum, and there needs to be a substantial collective effort to improve access and the ways that we bring this education to young people across the country. Our survey demonstrates that there is a clear need to increase the awareness of career and study options among older teens, females and BAME groups in particular.

We acknowledge that the Royal Society of Chemistry must build on its strong awareness and the clear role we must play with broadened accessibility of information for all. Beyond this, we need to see educators, governments, scientists and the media driving debate further.”

Following the record attempt, the used lemons were responsibly processed by Refood in Widnes, who generate renewable energy from food waste using the anaerobic digestion method (similar to an industrial-scale compost heap) to produce biogas. After further refinement the biogas is pumped directly into the National Gas Grid. Any remaining liquid is transformed into bio-fertiliser for local farming and agricultural use.