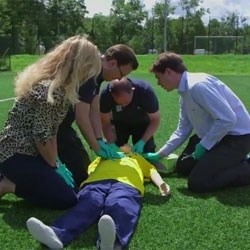 On June 26, 2003, in the 72nd minute of the 2003 FIFA Confederations Cup semi-final, Marc-Vivien Foe, a Cameroon footballer, collapsed in the centre circle. Medics attempted to resuscitate him, both on the pitch and at the stadium’s medical centre, but he died 45 minutes after his collapse.

Aged 28 at the time of his death, Foe’s sudden death shocked the football community. An autopsy detected evidence of hypertrophic cardiomyopathy, a leading cause of sudden cardiac death in young athletes.

In March 2012, Fabrice Muamba, a Bolton Wanderers player, suffered a cardiac arrest during an English Premier League match. His heart stopped for more than an hour, but thanks to the use of a defibrillator on the sidelines of the pitch, medics managed to keep him alive. He went on to make a full recovery.

I recently interviewed Prof. Jiri Dvorak, FIFA’s Chief Medical Officer, for our Science Behind the World Cup Special Feature. During the course of our interview, we discussed the traumatic sudden cardiac events that had occurred in football matches over the last decade. Prof. Dvorak’s emotional response to my questions left me in little doubt as to the continued sadness and shock felt by FIFA even now, nearly 11 years after the death of Foe.

Over the last decade, F-MARC, the FIFA Medical Assessment and Research Centre, has worked together with the world’s leading researchers in sports medicine to introduce new measures for tackling sudden cardiac arrest (SCA). As the first match of the 2014 FIFA World Cup in Brazil approaches, FIFA’s approach to keeping players ‘heart healthy’ combines preventative measures for players, with action plans for pitch-side personnel.

Sudden Cardiac Arrest (SCA) is defined as the ‘sudden, unexpected loss of heart function, breathing and consciousness’ (http://www.mayoclinic.org/diseases-conditions/sudden-cardiac-arrest/basics/definition/con-20042982). SCA is usually caused by disruption to the pumping action of the heart, which stops blood flow to the rest of the body. This is not the same as a heart attack (myocardial infarction) which occurs when blood flow to a portion of the heart is blocked. It is possible however, for a heart attack to trigger a SCA.

Medical examinations are conducted for all players and referees prior to every FIFA competition, to determine those who are predisposed towards cardiac problems. F-MARC has also developed education programs for paramedics, medical staff and sports physicians who will be the first to respond and deal with incidences of SCA on the pitch.

Last year FIFA announced that it would be distributing lifesaving medical kits, designed following extensive research by the F-MARC team. The FIFA Medical Emergency Bags will be sent to every FIFA Member Association, as well as being pitch-side at all stadiums hosting FIFA matches. The bags contain an automated external defibrillator and an instructional video and medical emergency kit.

FIFA’s approach to prevention and management of SCA does not currently include laboratory diagnostic testing. There are laboratory tests available to assess heart damage following a cardiac event, such as the troponin test, and to a lesser extent these days, the creatinine kinase (CK) and CK-MB. These tests detect proteins in the bloodstream that are released during a heart attack when heart muscle cells die. However, there currently is no diagnostic test that is capable of predicting heart attacks or SCA.

Preventative screening by FIFA involves the Precompetition Medical Assessment (PCMA). This is comprised of a focused player medical history, family medical history and cardiac specific physical examination, including an ECG (echocardiogram). This is designed to identify athletes with pre-existing conditions that place them at risk of catastrophic injury or sudden death.

There is hope that one day scientists will be able to use a diagnostic test to identify people at serious risk of sudden cardiac events. Earlier this year we reported on the development of a new ‘fluid biopsy’ technique that could identify patients at high risk of having a heart attack, by identifying specific cells as markers in the blood stream.

Researchers at the Scripps Research Institute (TSRI) have developed a procedure called the High-Definition Circulating Endothelial Cell (HD-CEC) assay to characterize circulating endothelial cells in the blood stream. Endothelial cells line the walls of arteries and their presence in the bloodstream has been strongly linked to ongoing heart attacks. The assay was shown to be able to identify HD-CECs by their morphological features and their reactions with specific antibodies. Heart attack patients were shown to have significantly elevated CEC levels compared to the healthy controls, giving hope that this test could be used as a predictive test for heart attack.
Until a reliable predictive test is developed and commercialized, the FIFA approach to SCA is arguably as comprehensive as it can be. During a football match, a player's best chance of survival following a SCA is the immediate recognition of a cardiac event by pitch-side medics, combined with fast and effective use of a defibrillator.

To be taken to the Science Behind the World Cup Special Feature, click here.