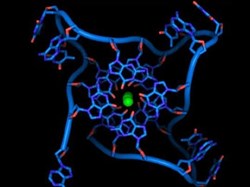 Four stranded DNA structures – known as G-quadruplexes – have been shown to play a role in certain types of breast cancer for the first time, providing a potential new target for personalized medicine, say scientists at the University of Cambridge.

In 1953, Cambridge researchers Francis Crick and James Watson co-authored a study published in the journal Nature which showed that DNA in our cells has an intertwined, ‘double helix’ structure. Sixty years later, a team led by Professor Sir Shankar Balasubramanian and Professor Steve Jackson, also at Cambridge, found that an unusual four-stranded configuration of DNA can occur across the human genome in living cells.

These structures form in regions of DNA that are rich in one of its building blocks, guanine (G), when a single strand of the double-stranded DNA loops out and doubles back on itself, forming a four-stranded ‘handle’ in the genome. As a result, these structures are called G-quadruplexes.

Professor Balasubramanian and colleagues have previously developed sequencing technologies and approaches capable of detecting G-quadruplexes in DNA and in chromatin (a substance comprised of DNA and proteins). They have previously shown that G-quadruplexes play a role in transcription, a key step in reading the genetic code and creating proteins from DNA. Crucially, their work also showed that G-quadruplexes are more likely to occur in genes of cells that are rapidly dividing, such as cancer cells.

Now, for the first time, the team has discovered where G-quadruplexes form in preserved tumor tissue/biopsies of breast cancer. Details of their study are published in the journal Nature Genetics.

The Cambridge team led by Professor Balasubramanian and Professor Caldas used their quantitative sequencing technology to study G-quadruplex DNA structures in 22 model tumors. These models had been generated by taking biopsies from patients at Addenbrooke’s Hospital, Cambridge University Hospital NHS Foundation Trust, then transplanting and growing the tumours in mice.

During the process of DNA replication and cell division that occurs in cancer, large regions of the genome can be erroneously duplicated several times leading to so-called copy number aberrations (CNAs). The researchers found that G-quadruplexes are prevalent within these CNAs, particularly within genes and genetic regions that play an active role in transcription and hence in driving the tumor’s growth.

Professor Balasubramanian said: “We’re all familiar with the idea of DNA’s two-stranded, double helix structure, but over the past decade it’s become increasingly clear that DNA can also exist in four-stranded structures and that these play an important role in human biology. They are found in particularly high levels in cells that are rapidly dividing, such as cancer cells. This study is the first time that we’ve found them in breast cancer cells.”

“The abundance and location of G-quadruplexes in these biopsies gives us a clue to their importance in cancer biology and to the heterogeneity of these breast cancers,” added Dr Robert Hänsel-Hertsch who is now at the Center for Molecular Medicine Cologne, University of Cologne, and is first author on the publication.

“Importantly, it highlights another potential weak spot that we might use against the breast tumor to develop better treatments for our patients.”

There are thought to be at least 11 subtypes of breast cancer, and the team found that each has a different pattern – or ‘landscape’ – of G-quadruplexes that is unique to the transcriptional programmes driving that particular subtype.

Professor Carlos Caldas from the Cancer Research UK Cambridge Institute, said: “While we often think of breast cancer as one disease, there are actually at least 11 known subtypes, each of which may respond in different ways to different drugs.

“Identifying a tumor’s particular pattern of G-quadruplexes could help us pinpoint a woman’s breast cancer subtype, enabling us to offer her a more personalized, targeted treatment.”

By targeting the G-quadruplexes with synthetic molecules, it may be possible to prevent cells from replicating their DNA and so block cell division, halting the runaway cell proliferation at the root of cancer. The team identified two such molecules – one known as pyridostatin and a second compound, CX-5461, which has previously been tested in a phase I trial against BRCA2-deficient breast cancer.

The research was funded by Cancer Research UK.