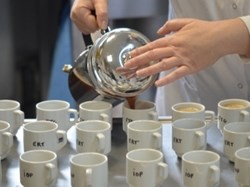 In a new paper published in Nature Plants, scientists from the Royal Botanic Gardens, Kew, the University of Greenwich, CIRAD (the French Agricultural Research Centre for International Development) and Sierra Leone reveal the results of an in-depth study of a ‘rediscovered’ coffee species that has the potential to help futureproof the coffee industry against climate change.

Stenophylla coffee (Coffea stenophylla), a rare wild species from Upper West Africa, has been found to tolerate much warmer temperatures than Arabica coffee (Coffea arabica), the world’s most popular coffee, whilst boasting a superior flavour. These unique qualities mean that stenophylla could soon be grown commercially, but in much warmer places than Arabica. It also has the potential to be used as a breeding resource, to produce new, climate resilient coffee crops for global consumption. This discovery comes at a crucial time, as up until this point, experts had not identified any robust means of protecting coffee farming from the climate crisis.

Dr Aaron Davis, Head of Coffee Research at RBG Kew, and lead author of the paper says: “Future-proofing the coffee supply chain to deal with climate change is vital – coffee drives a multibillion-dollar global industry, supports the economy of several tropical countries, and provides livelihoods for more than 100 million coffee farmers. To find a coffee species that flourishes at higher temperatures and has an excellent flavour is a once in a lifetime scientific discovery – this species could be essential for the future of high-quality coffee.”

Despite its global success, the coffee supply chain is plagued with challenges such as extreme weather events, worsening incidence of pests and diseases and, above all, accelerated climate change. So far, there has been limited progress in future-proofing the supply chain under current climate change projections so finding a climate resilient coffee crop is considered vital. Previously suggested solutions to improving resilience include relocating coffee farming areas and adapting the farming environment – both of which come with cost challenges and negative impacts on livelihoods and local communities. Until now, finding a coffee that can tolerate rising global temperatures, whilst also satisfying consumer preferences for flavour, has been a major challenge.

What about the coffee we drink now?

There are 124 species of coffee, but we rely on just two for 99% of our coffee consumption: Arabica and robusta, making up 56% and 43% of global production (respectively). Arabica, originating from the highlands of Ethiopia and South Sudan, is a cool-tropical plant with a mean annual temperature requirement of around 19⁰C. It is vulnerable to increasing global temperatures and coffee leaf rust, a fungal disease that has severely impacted coffee plantations in Central and South America. Robusta fares slightly better – the species grows at low elevations across much of wet-tropical Africa, requires a mean annual temperature of around 23⁰C, and is resistant to certain strains of coffee leaf rust. However, robusta falls short in its flavour and is widely regarded as inferior to Arabica, with the majority of its production used for instant coffee.

Until recently (late 2018) stenophylla had not been seen in the wild since 1954. The term ‘forgotten’ is applied to this species because it was once widely farmed in Upper West Africa. Today, its use as a crop species is non-existent, and only a few examples exist in coffee research collections. So, in December 2018, two of the paper’s authors (Dr Davis and Professor Haggar) travelled to Sierra Leone to work with development specialist Daniel Sarmu, to try and locate the species in the wild. They used historical specimens from RBG Kew to provide details of the last known locality of stenophylla coffee. With support of NGO Welthungerhilfe and the Sierra Leone Forestry Department, they visited the main target location, where they found only a single plant of stenophylla coffee. Moving east, they visited another forest area, and after several hours of trekking through dense forest, they finally located a healthy population.

Dr. Jeremy Haggar, Professor of Agroecology at the University of Greenwich and co-author of the paper says: “On average, smallholder farmers in Sierra Leone earn less than £100 per year from coffee production so the rediscovery of this native coffee species might finally offer an opportunity for some of the world’s poorest farmers to grow a crop that commands a decent price.”

A coffee that can handle rising temperatures

Endemic to Guinea, Sierra Leone and Ivory Coast, stenophylla grows wild in hot-tropical areas at low elevation, only 400 m above sea level. After collecting data for Arabica, robusta, and stenophylla, the paper’s authors set to work to understand their fundamental environmental requirements. They found that stenophylla grows and crops under similar climatic conditions to robusta, but with a higher mean annual temperature requirement of 24.9⁰C (1.9⁰C higher than that of robusta), and a substantial 6.2–6.8 ⁰C higher than Arabica. Stenophylla coffee is also reported to be drought tolerant, although this attribute requires further research.

Dr Justin Moat, scientist at RBG Kew, who led on the climate analysis in the paper says: “It is widely known that our beloved Arabica coffee in being impacted by climate change, and so the results of the study are extremely exciting. Our analysis shows that stenophylla coffee grows at substantially higher temperatures than Arabica, providing the sort of robust differences we need if we are to have any chance of a sustainable coffee sector under climate change.”

There had been no recorded sensory information for stenophylla for 100 years, due to its scarcity in cultivation and rarity in the wild so it was essential for this species to be properly evaluated. Obtaining a small sample from partners in Sierra Leone, stenophylla was assessed by an expert tasting panel at Union Hand-Roasted Coffee in London in the summer of 2020. The panel awarded the coffee a speciality score of 80.25 (based on the protocol of the Specialty Coffee Association) and identified Arabica-like qualities. To reach ‘speciality’ status, a coffee needs a score of 80 points or higher. Jeremy Torz from Union Coffee said, “Arabica is currently our only speciality coffee species, and so this score, particularly from such a small sample, was surprising and remarkable.”

After this initial tasting in London, an additional and much more substantial sample of stenophylla, this time from Ivory Coast, was obtained from the Coffea Biological Resources Center on Reunion Island in the Indian Ocean. The sample was evaluated at CIRAD’s sensorial analysis laboratory in Montpellier by a panel of judges, and then soon afterwards by coffee experts from companies including JDE, Nespresso and Belco. The 15-strong panel blind tested two Arabica samples (one high quality and one low grade), one high-quality robusta sample, and the Ivory Coast stenophylla.

The evaluation revealed that stenophylla has a complex flavour profile, with judges noting its natural sweetness, medium-high acidity, fruitiness, and good body (i.e. its texture; the way it feels in the mouth). Desirable tasting notes included peach, blackcurrant, mandarin, honey, light black tea, jasmine, spice, floral, chocolate, caramel, nuts, and elderflower syrup, as one might find in high-quality Arabica. When asked if the stenophylla sample was an Arabica, 81% of the judges said yes (compared to 98% and 44% for the two Arabica samples, and 7% for the robusta sample). Despite the high ‘Arabica-like’ score for stenophylla, 47% of the judges identified the sample as something new, suggesting a market niche for the rediscovered coffee.

Dr Delphine Mieulet, scientist at CIRAD, who led the tasting says: “These results provide the first credible sensory evaluation for stenophylla coffee, from which we are able to corroborate historical reports of a superior taste. The sensory analysis of stenophylla reveals a complex and unusual flavour profile that the judges unanimously found worthy of interest. For me, as a breeder, this new species is full of hope and allows us to imagine a bright future for quality coffee, despite climate change.”

Coffea stenophylla is classified on the IUCN Red List of Threatened Species as ‘Vulnerable’, so efforts are urgently required to safeguard the future of the species in the wild. Further work is required to fully evaluate its potential as a climate resilient, high-value crop species and breeding resource, including claims of drought tolerance and resistance to coffee leaf rust. This year, the four institutes involved in the paper plan to plant stenophylla seedlings in Sierra Leone and Reunion Island (CIRAD), in order to start assessing its agronomic potential under a range of environmental conditions.

David Behrends, Managing Partner and Head of Trading at Sucafina, comments: “These findings open the way for farming high-quality coffee in warmer climates, and could be part of the solution for ensuring a climate resilient coffee sector."

Daniel Sarmu, Development Specialist from Sierra Leone says: “We hope that stenophylla coffee will become a flagship export crop for our beloved Sierra Leone, providing wealth creation for our country’s coffee farmers. It would be wonderful to see this coffee reinstated as part of our cultural heritage.”