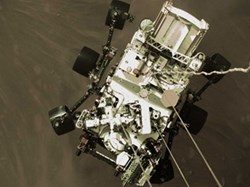 On February 18, 2021, NASA successfully landed the Perseverance Rover on Mars. This isn’t the first Mars mission, but it was the first time that the entry, descent, and landing of a spacecraft was filmed and broadcasted live for the public to watch and virtually participate in.

6 FLIR machine vision cameras captured the event from multiple angles, documenting all stages of the thrilling touchdown. While only a few minutes long, the footage has already helped engineers evaluate how well their work performed in space, and inspired millions of viewers around the world.

The cameras that captured the footage are FLIR RGB machine vision cameras, and include five 1.3- megapixel cameras and one 3.1-megapixel USB camera. “Our cameras are designed for operation on Earth, and not built to operate in outer space,” said Sadiq Panjwani, VP of the Integrated Imaging Solutions (IIS) division at FLIR. “So we were quite thrilled that NASA put them to the test.”

NASA began contacting FLIR in 2015 to investigate suitable cameras for the EDL (Entry, Descent Landing) system. Engineers were looking for commercial off the shelf (COTS) hardware with an emphasis on low cost and ease of system integration. This is the first time that FLIR machine vision cameras have been subjected to the extreme temperatures or high gravity forces experienced during the Mars landing. Everyone involved in engineering and manufacture of cameras at FLIR is thrilled about this testament to their durability and performance. And of course, ecstatic to say that their work has made it to Mars!

Congratulations to the team at NASA and everyone involved in making this historic milestone a reality.