Industry News: Could Nuclear Fusion Rockets Be The Key To Interstellar Space Travel? 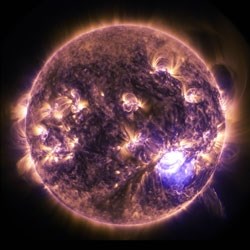 A British nuclear entrepreneur believes he is on the brink of a scientific breakthrough which will half the mission time to Mars. London based Richard Dinan, who credits Amazon founder Jeff Bezos as an influence, says the technology his company Applied Fusion Systems is developing will half the journey time to the red planet and make interstellar space missions feasible.

His team of nuclear scientists are developing a nuclear fusion reactor which will be small and light enough to fit inside a rocket. His vision is that in the close future, nuclear fusion will become a very real technology indeed. With the world’s largest fusion reactor- ITER due to turn on in 2030, fusion is becoming a major interest to today’s technology entrepreneurs.  It is well known that fusion has the ability to solve the world’s energy crisis but investors seem to remain hesitant. Richard however began investing in fusion years ago.

Fusion is a key energy source but nuclear fusion will be used for propulsion applications too; revolutionising space exploration and leading to the dawn of the Star Trek age where planets that are currently out of our reach, could one day be travelled too and explored by humans.

Richard Dinan, is the author of The Fusion Age, a bestselling book on the possibilities of new nuclear technologies. He believes we are living at the dawn of the fusion age. He has visited the most cutting-edge fusion facilities and spent time with many of the world’s finest fusion scientists. His book describes his findings and frustrations as a technology investor.

Controversially, the nuclear entrepreneur is a former star of TV reality show Made In Chelsea. He has been working on nuclear fusion for several years and admits he was inspired by companies such as Amazon founder Jeff Bezos’s space company Blue Origin which showed that private business could not only become involved in government space and energy projects, but sometimes even outpace them.

If humans are to visit neighbouring star systems such as Alpha Centauri, we first need to develop space craft with faster exhaust speeds. Fusion rockets could well provide the solution. Richard Dinan said: “Applied Fusion is a researcher and developer of nuclear fusion technology - specifically small reactors and the technologies which can be applied from the manufacture of these reactors. There hasn’t been the same level of funding in fusion as there has been in fission as it cannot be weaponised. Now I think people are starting to realise just how significant the fusion milestone will be for so much innovation. It’s a new age and its getting real very quickly”.

“Fusion is about emulating what happens within a star. One way of doing it is a tokamak device which is a donut shaped vessel, a vacuum vessel, where we use very powerful electro-magnetic coils to crush and confine a plasma. By heating plasma to a very high temperature, you give the particles within it a chance to overcome their electrostatic propulsion to each other. And if they come close enough they can fuse releasing in this case a neutron. A neutron is not a charged particle so it escapes our magnetic fields and flies out to collide with the walls of the reactor. The kinetic energy from the neutron converts into heat which we can use to drive a conventional steam turbine. If you can harness fusion power for electricity then you can also harness it for rocket thrusters. Applied Fusion has been working on building reactors specifically for this purpose."

“We’re building reactors on the scale that we believe are the right size. Much more cost effective to build. Smaller and lighter, the advantages are that you could send a rocket a lot further and a lot faster, whist generating large amounts of surplus electricity to power on board, energy intensive robotic missions. It has been shown that fusion thrusters have the potential to generate exhaust velocities of up to 15,000 miles per second, potentially halving mission times to Mars and significantly improving the Delta V. (Reducing the fuel and thus the weight and cost of missions) This is a very significant milestone.”