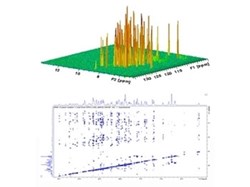 Professors Lucia Banci and Claudio Luchinat at the University of Florence, Italy, are expected to be the first customers to receive a 1.2 GHz NMR spectrometer, once further systems development and factory testing has been completed, a process that is expected to take several more months. After initial data acquisition of CERM test samples on one of the 1.2 GHz systems, they stated: "At Bruker's UHF facility in Switzerland, high resolution spectra have been acquired on alpha-synuclein, which is an intrinsically disordered protein that has been linked to diseases such as Alzheimer's and Parkinson's. In addition, we have also been able to review first 1.2 GHz NMR spectra of a protein which is associated with several types of cancer. Without a doubt, the improved resolution of the 1.2 GHz instrument - made possible by the increased dispersion at high magnetic fields - will help to advance important fields of research, such as structural biology. We look forward to receiving the 1.2 GHz NMR spectrometer in our laboratory once final developments and factory evaluation have been completed."

Dr. Falko Busse, Group President of Bruker BioSpin, said: “The new 1.2 GHz system is a technological revolution that will enable new molecular and cell biology discoveries. We value the trust our ultra-high field NMR customers place in us, and we are proud to have achieved this further milestone of generating the world’s first high-resolution protein NMR data at 1.2 GHz. While we are not yet completely finished with all developments for the new 1.2 GHz system, our recent rapid progress is a testament to our commitment to innovation, and to working collaboratively with our customers to develop enabling scientific capabilities.”